PHOENIX — The U.S. Fish and Wildlife Service (USFWS) and the Arizona Game and Fish Department (AZGFD) on June 11 extended the deadline for the public to comment on the draft Environmental Assessment (dEA) of Arizona’s sport fish stocking program. The original June 11 deadline has been extended for two weeks, until June 25, 2021, to allow for more comment opportunity. The methods of providing public comments remain the same as in the original announcement and are described below.

The dEA is part of a process to continue to allow federal Sport Fish Restoration funding to support AZGFD’s long-standing program of stocking fish for public recreational opportunities, and for hatchery operations and maintenance. Each year, thousands of anglers in Arizona take advantage of the fish stocking program, which is funded in part by federal dollars from the Sport Fish Restoration Program and augmented by state dollars from fishing license sales.

Every 10 years, USFWS and AZGFD evaluate the social, economic and environmental effects of Arizona’s stocking program, and pursuant to the National Environmental Policy Act (NEPA), prepare a dEA that analyzes possible actions or alternatives. The preferred alternative for the agencies, also known as the Proposed Action, would allow AZGFD to continue its stocking program for the next 10 years and also includes conservation measures to reduce potential impacts on federally listed or sensitive native aquatic or semi-aquatic species.

Members of the public are encouraged to review and provide comments on the dEA. Written comments can be submitted from May 11, 2021 through 5 p.m. (Arizona time) on June 25, 2021. Comments can be either:

Two Facebook Live sessions with information about the dEA were held June 1 and June 2 and are available for on-demand viewing:

Recreational angling in Arizona created a statewide economic impact of more than $1.4 billion in 2013, according to the 2013 Economic Impact of Fishing in Arizona by Responsive Management (the last year such a survey was done). In fiscal year 2020, AZGFD sold 273,902 fishing licenses, generating revenue of nearly $14 million. During the last six years, AZGFD has stocked approximately 3 million fish per year. The majority of stockings were cold water species, such as Rainbow, Apache, Brook, Cutthroat, and Brown Trout. The AZGFD also stocked warm water species including Channel Catfish, Largemouth Bass, Black Crappie, Redear Sunfish, and Bluegill.

In 2013, there were 5,979,637 angler days of fishing in Arizona. Sport Fish Restoration funding will make it possible for AZGFD to continue to meet part of this demand for public recreational angling opportunities on Arizona’s waters.

The Arizona Game and Fish Department strives to be a national conservation leader and Arizona’s most trusted source for wildlife conservation information and products. 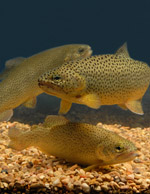 AZGFD furthered this vision in 2013 by embarking on a novel planning process that culminated in a multi-species fisheries management plan for the Verde River Watershed. This planning approach shifted away from a single species focus to interactions between sport fish and native aquatic species, reflecting AZGFD’s mission to conserve Arizona’s diverse wildlife resources while managing for safe, compatible outdoor recreation opportunities. AZGFD will be developing similar plans for all of Arizona’s major watersheds to guide fisheries management into the future.

For each major watershed in Arizona, AZGFD will develop interactive web maps as an alternative, visual way to easily explore management information outlined in the plan.

The AZGFD has management authority for all wildlife in Arizona, but shares management responsibility for habitat with many partners, including state, federal, tribal and local agencies. For each fisheries watershed-based management plan, the AZGFD invites other agencies to participate on the planning team, depending on the watershed and jurisdiction to manage lands and habitat.

The multispecies planning approach incorporates many elements from AZGFD’s Wildlife 20/20 Strategic Plan including:

Questions/Comments? Send us an email to fisheriesmgmt@azgfd.gov