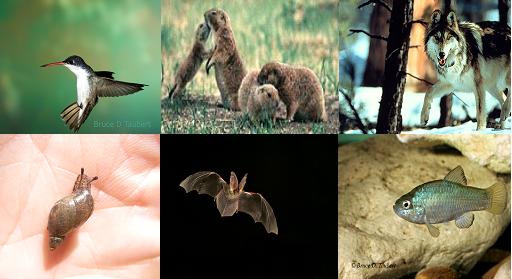 Much of Arizona’s natural biological diversity is composed of nongame species, wildlife that is neither hunted nor fished in a traditional sense. The Department’s NGEWM was established in 1983 to address the needs of these species and the public’s concern about them for conservation, recreation, or other purposes. The NGEWM also manages some species of wildlife that may be harvested, such as certain reptiles and amphibians. It also focuses on wildlife that is imperiled, including those federally listed as endangered or threatened. Additionally, NGEWM administers Scientific Collecting Permits, which oversees the take of any species for scientific, educational, or public welfare purposes. Administrative oversight and the planning lead for NGEWM are vested in the Department’s Nongame Branch located in Phoenix, but work units Department-wide, including all six regions, play a vital role.

Relatively few native species of wildlife have been extirpated from Arizona since pre-settlement days and even fewer have become extinct. In fact, most native species in Arizona are still abundant and offer tremendous recreational and educational opportunities, whether through harvest or observation. Some species are no longer abundant and many are increasingly threatened by habitat degradation, disease, introduced species and climate change. The role of the NGEWM is to manage all nongame and endangered wildlife in Arizona, preferably using a landscape approach to maximize the benefits of management activities for multiple species. Some species or taxonomic groups require more focused attention and comprise a significant portion of the subprogram’s work effort.

The NGEWM uses a series of conservation tools and activities as part of our management practices. Many of these tools are connected to the Endangered Species Act (ESA), as amended in 1973. These include but are not limited to: use of Section 6 funds for species recovery, development and implementation of species Recovery Plans, development and use of Candidate Conservation Agreements with Assurances and Safe Harbor Agreements. Additional resources and partnerships exist due to the development of the Statewide Comprehensive Wildlife Conservation Strategies (CWCS – also known as State Wildlife Action Plans or SWAP) that also make the state eligible for State Wildlife Grants (SWG).

Other important funds for the NGEWM include Arizona’s State Lottery and its allocation to the Department’s Arizona Heritage Fund (Lottery Dollars Working for Wildlife), W95, Game and Fish Funds, Arizona’s Nongame Wildlife Checkoff on the state income tax forms, volunteer work, donations, and contract monies (from federal and non-government organizations).