Read the article “Mountain lion populations are best managed by professional biologists” by mountain lion biologist Brian Jansen, Ph.D. posted April 20, 2022. An abbreviated version of this article ran as an op-ed in the Arizona Republic, April 6, 2022.

A resolution concerning the implementation of federal initiatives, loss of multiple-use public lands, 2021

Testimony of AZGFD Director Larry Voyles before the Senate Committee on Environment and Public Works (“Conservation, Consultation and Capacity: States’ Views on the Need to Modernize the Endangered Species Act”). May 10, 2017. 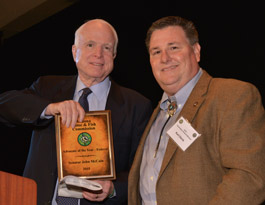 The purpose of these awards is to recognize Arizonans who have contributed significantly to the conservation of the state’s wildlife, its outdoor heritage, and the mission of the Arizona Game and Fish Department.

The complete list of award recipients is as follows:

The Arizona Game and Fish Commission thanks you all for your contributions to wildlife conservation and our outdoor heritage!