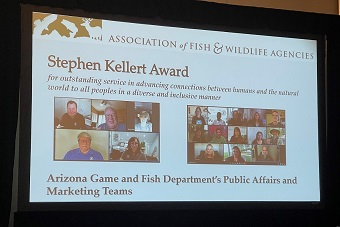 PHOENIX — ​​​​​The Arizona Game and Fish Department (AZGFD) won two awards, and southern Arizona rancher Ian Tomlinson and his Vera Earl Ranch won one at the Association of Fish & Wildlife Agencies (AFWA) annual awards ceremony in Providence, Rhode Island, on Sept. 13. The awards recognize individuals and organizations for their dedication to advancing fish and wildlife conservation.

AZGFD’s Fair Chase Committee was the recipient of this year’s Boone and Crockett Club Award, which honors an agency and team leader for outstanding achievement in promoting and encouraging outdoor ethics.

In 2015, the Arizona Game and Fish Commission adopted a policy related to “fair chase,” a term that applies to hunting as the “ethical, sportsmanlike, and lawful pursuit and taking of any free-ranging wild game animal in a manner that does not give the hunter an improper or unfair advantage over the game animals.” AZGFD subsequently convened an ad hoc fair chase committee, and out of the committee’s deliberations sprang the idea for a social media campaign to “popularize” the concept of fair chase – called the #IamFairChase Campaign. While AZGFD primarily ran the campaign, it was the public members of the committee who were its “thought leaders.”

AZGFD’s Public Affairs and Marketing Teams were the recipients of the Stephen Kellert Award, which honors individual or group efforts for outstanding service in advancing connections between humans and the natural world to all peoples in a diverse and inclusive manner.

The teams were recognized for their combined efforts in several areas:

Southern Arizona rancher Ian Tomlinson and the Vera Earl Ranch were the recipients of the Private Lands Fish and Wildlife Stewardship Award for their proactive conservation and environmental practices and for continuing to exhibit outstanding stewardship of fish and wildlife resources.

Mr. Tomlinson applies a strong conservation ethic in concert with the ranch business model. He and the Vera Earl Ranch work to promote a healthy ecosystem for all species and are currently working on a climate plan that will make the ranch more resilient in the future. He is highly involved with the local conservation districts and community and embodies good stewardship in all aspects.