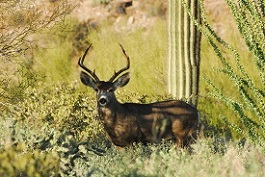 PHOENIX — The Arizona Game and Fish Department (AZGFD) has announced that Arizona continues to be clear of Chronic Wasting Disease (CWD), a fatal wildlife disease that affects the nervous system of deer and elk.

Department officials did not find any cases of CWD in the 1,589 deer (mule and white-tailed) and elk that were sampled in 2020 — the most in more than a decade. AZGFD collected 519 samples from animals that were harvested and voluntarily submitted by hunters, and another 1,070 samples through partnerships with game processors and taxidermists.

The department is grateful for the assistance of hunters who submit deer and elk heads for testing, as well as the cooperation of game processors and taxidermists. For more information about CWD, visit the Chronic Wasting Disease Alliance website at http://cwd-info.org/. Also, check out a video that addresses 14 of the most commonly asked questions about CWD. The questions were submitted by hunters from across the nation, and the answers were provided by top CWD experts and researchers. The video was produced by the National Deer Alliance.