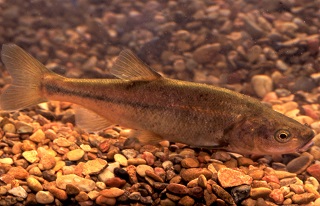 PHOENIX – The Arizona Game and Fish Department (AZGFD) applauds the April 5 determination by the U.S. Fish and Wildlife Service (USFWS) that the Lower Colorado River basin distinct population segment (DPS) of roundtail chub is not at risk of extinction in the foreseeable future and does not warrant listing under the Endangered Species Act (ESA).

As part of this action, USFWS also determined that the Gila chub, currently listed as endangered under the ESA, should be considered for delisting, based on a 2017 finding that ruled the roundtail, headwater and Gila chub are all a single species. That finding was informed in part by a scientific study authored by AZGFD.

“These decisions are a big win for chub and for those who manage in the Lower Colorado River basin,” said AZGFD Aquatic Wildlife Chief Julie Carter. “They will allow more flexibility and opportunities to protect and conserve chub through active management in Arizona.”

In determining the status of the Lower Colorado River roundtail chub, USFWS determined that the primary threats to it are non-native species and alterations to natural stream flows, which have reduced the distribution and abundance of the chub in the past and continue to affect populations today. These threats may also be exacerbated by climate change in the future. However, these threats do not pose a risk of extinction for the species, in part due to long-term conservation and land management efforts by stakeholders.

Recognized as a potentially sensitive species, many federal, state and county agencies and Tribal nations have initiated best management practices and conservation commitments for the species and its habitat. These conservation efforts have stabilized roundtail chub populations. Currently, biologists estimate that roundtail chub populations are distributed across 34% of its historical range in the Lower Colorado River Basin, and most of the existing populations are considered stable or increasing according to monitoring data, despite the co-occurrence of non-native species across much of the range.

The roundtail chub is a member of the minnow family and is endemic to the Colorado River watershed with populations in Arizona, New Mexico, Colorado, Utah, and Wyoming. Adults can vary in size from 4 to 20 inches in length, and their lifespan can exceed 10 years. They are omnivorous, feeding on algae, aquatic and terrestrial insects, and fish.

The finding was published in the Federal Register on April 5, 2022 under Docket No. FWS-
R2-ES-2022-0001. The USFWS remains interested in information regarding the status and conservation of, and any potential threat to, the roundtail chub and the Gila chub. Please submit information by email to incomingazcorr@fws.gov.