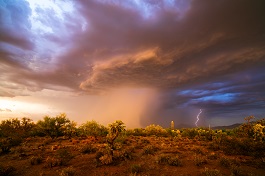 PHOENIX — Monsoon weather is just around the corner, and the Arizona Game and Fish Department (AZGFD) cautions boaters and off-highway vehicle (OHV) users that weather conditions can quickly change and become dangerous for those who aren’t prepared.

The severity of monsoon storms varies greatly from a minor dust storm to a violent thunderstorm capable of producing hail, deadly lightning and flash flooding.

“Arizona is known for its often unbearable summer heat; it’s also known for great places to get outdoors, whether that’s on an OHV in the high country or one of our many lakes or rivers,” said Josh Hoffman, boating safety education coordinator.

“However, it’s important for people to keep the day’s weather in mind. If severe weather is likely, or storms are starting to build up around you, it’s a good time to safely get off the water or trails and head indoors.”

Paddlers who enjoy the water on a paddleboard should pay extra close attention to the weather. “In previous years most boaters caught in monsoon weather were paddlers,” Hoffman said.

AZGFD offers the following advice to protect those recreating during a monsoon:

When on a boat, personal watercraft or paddleboard

For more information on boating in Arizona, visit www.azgfd.com/Boating/.

When riding an OHV:

For more information on riding an OHV in Arizona, visit www.azgfd.com/OHV/.