AZGFD, partner agencies to spread word about dangers of drinking while boating 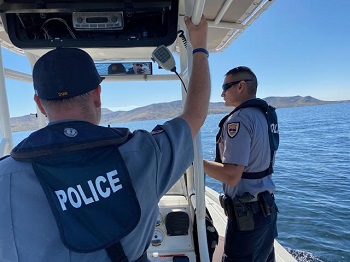 PHOENIX — The Arizona Game and Fish Department (AZGFD) and partner agencies will be patrolling Arizona’s lakes this Fourth of July weekend to provide heightened enforcement and awareness about the dangers of drinking alcohol while boating.

The goal of “Operation Dry Water” is to reduce the number of alcohol and/or drug-related fatalities and accidents by spreading this important message to the public: Drinking and boating is a potentially deadly combination.

“The number one priority is to create a safe environment for everyone who is out enjoying Arizona’s waterways,” said Danny Rodriguez, watercraft law administrator. “If alcohol is being consumed on your boat, always designate a sober operator. It’s no different from driving a car on the highway; the operator is responsible for everyone onboard the boat.”

During last year’s Operation Dry Water campaign, Arizona law enforcement officers stopped 2,966 boaters, made 12 arrests for operating watercraft while under the influence, and wrote 156 citations. Nationwide, more than 271,000 boats were stopped and 563 arrests were made for boating under the influence.

While the main focus of the campaign is geared toward those who operate a boat under the influence of alcohol and/or drugs, officers may also give warnings and write citations for other issues, including operation, fire extinguisher and life jacket violations. Arizona state law requires that children 12 and under must wear a life jacket at all times when the boat is underway, and there must be one life jacket onboard for every passenger. In addition, a throwable flotation device, usually a cushion with handles or a ring buoy, is required for all watercraft longer than 16 feet (except for canoes and kayaks).

Operation Dry Water was launched in 2009 by the National Association of State Boating Law Administrators in partnership with the United States Coast Guard (USCG). The initiative is credited with removing more than 4,000 impaired operators from the nation’s waterways.

AZGFD has always been an Operation Dry Water partner. “Anything that helps to prevent fatalities and injuries in Arizona is a valuable investment of our time and resources,” Rodriguez said.

In 2019, the USCG reported that alcohol was the top contributing factor in fatal boating accidents, and that sun, wind, noise, vibration and motion of the boat can intensify the side effects of alcohol, drugs and some medications.