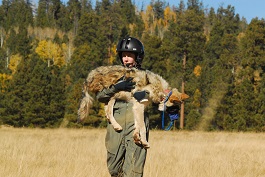 PHOENIX — The Arizona Game and Fish Department is reviewing the draft Mexican wolf recovery plan released June 29 by the U.S. Fish and Wildlife Service. Although the plan appears to address the substance of AZGFD’s lawsuit filed in June 2015, Department scientists are continuing to evaluate the plan in detail before submitting formal comments by the Aug. 29 comment deadline.

The draft plan outlines several key strategic acknowledgements to ensure the success of Mexican wolf reintroduction, including the recognition of Interstate 40 in Arizona and New Mexico as the appropriate northern boundary for recovery encompassing all of this wolf’s historical range, as well as recognition of the critical role Mexico plays in any recovery effort within the U.S.

“This science-based plan provides a description of the Mexican wolf’s historical range to ensure proper genetic management between Mexican wolves and Canadian gray wolves that were transplanted into the northern Rocky Mountains, which are prominent in areas north of I-40,” said Jim deVos, assistant director for wildlife management for the Arizona Game and Fish Department. “This affords agencies invested in wolf recovery a pathway toward preserving and protecting the Mexican wolf from genetic swamping that would jeopardize this uniquely smaller subspecies.”

Arizona Game and Fish’s involvement in Mexican wolf conservation began in the mid-1980s. Since that time, the Department has spent more than $7 million on wolf recovery in the state and has been the predominant on-the-ground presence working to manage Mexican wolves.

Genetic viability has been one of the most controversial elements of Mexican wolf recovery. “The Department is analyzing the plan, which appears to be developed on the best available science by Dr. Philip S. Miller, a world-renowned population viability analysis expert,” said deVos. “Based on Dr. Miller’s analyses, the plan includes explicit science-based numbers of wolf releases required to maintain a genetically diverse Mexican wolf population.”

DeVos also noted that the draft plan outlines criteria for formally delisting and down-listing the Mexican wolf as an endangered subspecies, and that it also formally recognizes the key role Mexico plays in any recovery effort, given that 90 percent of Mexican wolf historical habitat is within Mexico.

“In total, the plan provides management options and direction to future delisting of Mexican wolves as an endangered subspecies and addresses weaknesses in the 1982 recovery plan,” said deVos. “We will work with the U.S. Fish and Wildlife Service and other agencies to ensure the success of wolf recovery efforts, in balance with other elements of the ecosystem, wildlife and the people who live, work and recreate on this landscape.”

In June 2015, AZGFD filed a lawsuit against the secretary of the Department of Interior and the Fish and Wildlife Service seeking an updated recovery plan – a requirement of the Endangered Species Act, the first update since the current plan was published in 1982. In April 2016, the Service signed a settlement agreement with AZGFD and other parties to complete a final revised Mexican Wolf Recovery Plan by the end of November 2017.

The public is invited to submit written comments to the U.S. Fish and Wildlife Service regarding the draft plan, either electronically (go to http://www.regulations.gov and enter the docket number FWS-R2-ES-2017-0036 in the search bar), or by U.S. mail or hand-delivery to: Public Comments Processing, Attn: FWS-R4-ES-2017-0036, U.S. Fish and Wildlife Service, MS: BPHC, 5275 Leesburg Pike, Falls Church, VA 22041-3803. Comments must be received on or before Aug. 29, 2017.  To view the draft recovery plan and other documents, visit https://www.fws.gov/southwest/es/mexicanwolf/MWRP.cfm.

The Service also will hold two public meetings in Arizona to provide an opportunity for citizens to learn about the revised Mexican wolf recovery plan and to provide written comments. The dates and times of these information meetings are: