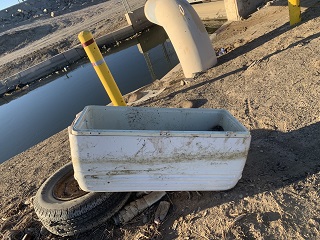 Reward of up to $1,500 offered for information leading to an arrest

YUMA, Ariz. — A reward of up to $1,500 is being offered by the Operation Game Thief Program for information leading to the arrest of those responsible for the illegal killing of one female mule deer near Yuma, Arizona. The crime likely took place sometime during the weekend of Oct. 28-31, 2022, near Yuma, Wellton, or Dome Valley.

The mule deer doe was found inside of a white cooler floating in the Salinity canal behind the Pacific Avenue Athletic Complex. The animal had been quartered with neck meat removed. All other meat had been abandoned and left to waste.

“The unlawful killing of this female mule deer was the act of a criminal, most of what was edible was left to waste,” said Officer Yosie Hyink, an AZGFD Wildlife Manager in the Yuma region. “If caught, the violators could face several criminal charges including take during a closed season, waste of edible meat and criminal littering, not to mention losing their hunting and fishing privileges in the state of Arizona.” There is currently no open season for the take of mule deer does in the Yuma area.

“Poachers are not hunters; they are criminals who steal from the resource and from the residents of Arizona,” said Hyink.

Anyone with information can call the Operation Game Thief hotline 24/7 at (800) 352-0700. Caller identities remain confidential and those reporting may do so anonymously upon request. Callers should reference OGT case #22-003413 when reporting information on this case.