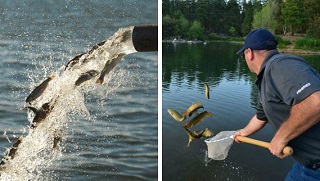 During a routine Aquatic Invasive Species (AIS) inspection at Page Springs Hatchery (PSH) near Cornville on Aug. 20, five juvenile New Zealand mudsnails (NZMS) were discovered in two raceways. This is the first time in two years that NZMS have been found at the hatchery since they were initially discovered in October 2019. For the last two years, the facility has operated under strict biosecurity protocols, and prophylactic treatments were conducted annually.

A new treatment to eradicate the snails from the hatchery has been started. In order to reduce the risk of spreading NZMS to other parts of the state, fish stockings have been suspended from PSH until AZGFD is completely satisfied that the NZMS have been completely eradicated from the fish rearing units. AZGFD will need to off-load some trout from the hatchery in order to thin several raceways. This amounts to 20,000 fish, which AZGFD plans to stock into Oak Creek at the rate of 5,000 per week. Oak Creek has had several positive e-DNA tests for NZMS.

The waters that will be impacted by the temporary suspension of fish stockings from PSH during the treatment are:

In order to minimize the impact of the temporary suspension of PSH stockings, AZGFD is coordinating with its Community Fishing Program to purchase trout from an outside vendor to ensure the listed locations receive trout stockings as close to the stocking schedule as possible. These will be delivered in two shipments the week of Sept. 6 and the week of Sept. 27. AZGFD hopes to resume stockings after completing the 40 days of treatment (approximately October 2).