Operating Under the Influence (OUI)

Picture Lake Havasu on a sunny day and you might think of college students with cases of beer on board, racing up and down the waterways. You might say to yourself, “It’s just harmless fun.” But operating a boat while impaired is just as dangerous — and just as illegal — as drinking while driving a car. The legal limit for blood alcohol is .08 in both cases.

To detect and remove impaired and unsafe boaters, officers from the Arizona Game and Fish Department and other agencies in Arizona and the bordering states of California and Nevada conduct saturation patrols. A boating law enforcement saturation patrol is on the water for one reason only — to save lives. Saturation patrols and OUI checkpoints, a similar operation, are conducted on Arizona’s lakes and rivers during the busiest boating months (March through September).

If you’re waved over by an officer during a saturation patrol or you enter an OUI checkpoint area while boating Arizona’s waterways this summer, don’t worry — if your boat operator is sober and the boat is safe, you’ll quickly be on your way again.

The boat’s driver will be checked to ensure he or she is not endangering others by operating a boat while under the influence of alcohol, and your boat will be assessed for its safety equipment to ensure it meets legal requirements. 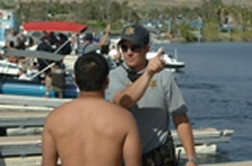