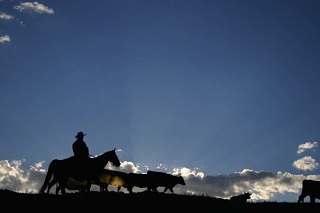 PINETOP, Ariz. – The Eastern Arizona Counties Organization (ECO) has made a contribution of $25,000 to support the Arizona Game and Fish Department’s Range Rider Program that is directed by the Mexican Wolf Interagency Field Team.

“The Arizona Game and Fish Department and its conservation partners are grateful to the ECO for their support of the Range Rider Program,” said Jim deVos, AZGFD Mexican wolf coordinator. “One of the key activities the department is engaged in is reducing depredations on livestock in the wolf recovery area. Based on the number of documented depredations since 2019 when the program was initiated, we have seen a decline in depredations which is attributed to the Range Rider Program.”

A range rider is a person who spends time in areas where wolves and cattle are in proximity and chases wolves from the area. It is a way of proactively deterring conflict between wolves and livestock. The range rider will work in much of eastern Arizona and will be directed to areas where high levels of depredations are occurring.

“ECO is pleased to provide this funding to AZGFD,” said Jason Whiting, ECO chair. “Depredations peaked in 2019 when the Range Rider Program was initiated by the department and other cooperators. It is important to note that funding for the Range Rider Program comes from modest county budgets, but the ECO believes that putting what we can into on-the-ground wolf-depredation avoidance is vital to reaching a balance between the ESA goal of recovery and the costs to Arizona ranchers.”

Richard Lunt, ECO vice chair, has been actively involved in wolf depredation prevention management. “Even with an increasing Mexican wolf population since 2019, documented depredations have declined by nearly 40 head of livestock. This represents money well spent by ECO to help promote balance between livestock production and wolf recovery,” he said.

Clay Crowder, the department’s assistant director for wildlife management added, “As the wolf population continues to grow, reducing conflict over depredations is essential and something that the IFT works on daily. This financial assistance from ECO will be put directly on the ground.”