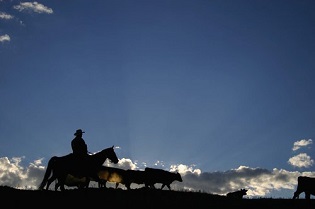 SHOW LOW, Ariz. – The Eastern Arizona Counties Organization (EACO) has made a contribution of $25,000 for 2021 to support the Range Rider Program managed by the Arizona Interagency Field Team (IFT) of the Mexican Wolf Recovery Project.

Last year EACO made a $35,000 contribution toward the Range Rider Program, and depredations dropped 39% compared to the same time period the previous year, even though the Mexican wolf population grew. The end-of-year population count increased 14% from 163 in 2019 to 186 in 2020.

Range riders are people who spend time in areas where wolves and cattle are in proximity and chase wolves from the area. It is a way of proactively deterring conflict between wolves and livestock. The work occurs in much of eastern Arizona and is directed to areas where high levels of depredations are occurring.

“The Eastern Arizona Counties Organization has really stepped up in the effort to help reduce Mexican wolf depredations by providing, for a second straight year, a grant to the Arizona Game and Fish Department to support the Range Rider Program,” said Jim deVos, Mexican wolf coordinator for the Arizona Game and Fish Department. “Those who manage wolves on the ground have found that range riding is one of the more effective tools to reduce depredations, and the funding from EACO has been invaluable to the department in supporting additional range riders.”

“EACO is pleased to provide this funding to AZGFD and the IFT,” said Jason Whiting, EACO chair. “Prior to this past year when funding was provided, the number of depredations over the previous two years had increased as the wolf population increased, and this was impacting the region’s ranchers. Wolf depredations usually peak in early summer and continue into the fall, so this funding for the Range Rider Program will be put on the ground now.”