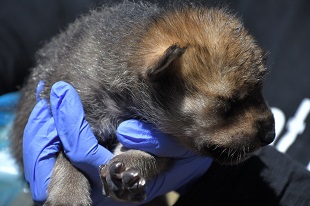 PHOENIX — Eleven genetically valuable captive-born Mexican wolf pups have been placed into wild dens to be raised in the wild by their surrogate parents after another successful fostering season. Now in its seventh year, the Mexican wolf fostering program continues to help boost the genetic diversity of this endangered subspecies.

Over a three-week period this spring, 11 pups were fostered into five wild packs across New Mexico and Arizona. The pups traveled from captive facilities across the U.S. as part of a coordinated effort to place genetically diverse wolves into the wild population in support of recovery efforts.

Fostering is a proven method used by the Mexican Wolf Interagency Field Team (IFT) to increase genetic diversity in the wild Mexican wolf population. It begins with carefully managed breeding by the Mexican Wolf Species Survival Plan (SSP) program to produce genetically diverse pups within the captive population. Within 14 days of whelping (being born), the captive-born pups are transported to the wild and mixed together with similarly aged wild pups.

Once all of the pups are placed back into the wild den, the breeding female’s maternal instinct kicks in. She will feed and care for both the wild and captive-born pups. With the help of her pack mates, the pups will be raised with the skills and knowledge needed for a life in the wild. The IFT has documented that fostered pups have the same survival rate as wild-born pups in their first year of life (about 50%).

“The care, planning and teamwork that went into this year’s cross-fostering is remarkable,” said Ed Davis, biologist with the U.S. Fish and Wildlife Service. “Many contributed to the success of this year’s efforts, including interns, biologists, veterinarians, captive facility staff, and individuals that provided flight support. It will take all of us continuing to work together to achieve greater genetic diversity in the wild population.”

Aerial support for this year’s operations was provided by LightHawk Conservation Flying and the Arizona Game and Fish Department’s Aviation Program.

“Although the 11 pups fostered is lower than hoped for, it is a major contribution to managing genetic improvements in the wild population,” said Jim deVos, Arizona Game and Fish Department’s Mexican wolf coordinator. “Since the inception of the program, 83 pups have been placed into wild wolf dens and as a result, three of four genetic criteria have shown improvements, which bodes well for the long-term survival of the Mexican wolf. Planning has already begun for the 2023 fostering program, with a goal of getting more pups in dens next year than this year.”

Pups are too young to be radio collared when fostered, but genetic samples are taken so they can be identified if captured at a later date. It is likely that other fostered pups are currently alive and contributing to improving the genetic diversity of the wild population and helping meet recovery criteria, but have not yet been recaptured.

The IFT will continue to monitor the packs that pups were placed in through GPS and radio telemetry signals from collars on older wolves within the pack to avoid further disturbance. Later, through remote camera observations and efforts to capture the young of the year, the IFT plans to document additional survival of cross-fostered pups as well as genetically diverse offspring from cross-fostered wolves that are now having litters of their own.

The end-of-year census for 2021 showed a minimum of 196 wild Mexican wolves in the Mexican Wolf Experimental Population Area. This marked a 5% increase in the population from a minimum of 186 wolves counted at the end of 2020. This is the sixth consecutive year of growth in the wild population and represents a doubling of the population since 2015.