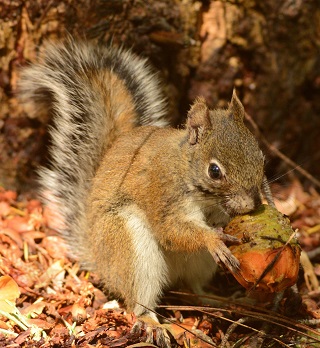 PHOENIX — The annual interagency survey of the endangered Mount Graham red squirrel showed an increase in the latest population estimate in the Pinaleño Mountains of southeastern Arizona, likely due to a new survey method.

The annual survey, conducted jointly by the Arizona Game and Fish Department (AZGFD), Coronado National Forest, and the U.S. Fish and Wildlife Service, resulted in an estimate of 156 squirrels. This is an increase from the 109 squirrels estimated in 2021 after a new survey method was implemented to more thoroughly survey their habitat.

“After the Frye Fire impacted a significant amount of the forest, we needed a better survey method in order to search out areas that red squirrels may not have been previously occupying,” said Holly Hicks, the department’s small mammal project coordinator. “This method was piloted for the past three years in conjunction with our usual annual survey to determine the accuracy and to compare the two methods.”

Previous annual red squirrel surveys focused on visiting all known “middens,” or areas where red squirrels store their cones. This method did not systematically detect middens created by red squirrels as they moved to new or different areas on the mountain.

The new method now involves systematically searching for active middens within survey plots that are designed to capture the majority of red squirrel habitat in the Pinaleño Mountains. This enables new middens to be detected as they are created, and activity at these middens is then used to estimate the population size.

“We work to actively manage and restore forest conditions for the benefit of all species on Mount Graham, including the Mount Graham red squirrel,” said George Garcia, the Safford District Ranger of the Coronado National Forest. “We are proud to be part of the efforts being taken by the interagency team.”

Marit Alanen, lead biologist for the Mount Graham red squirrel with the U.S. Fish and Wildlife Service, said: ”It’s exciting to have a method where we can survey red squirrels and also allows us to detect occupied areas we may not have known about before.

“Some of these areas are pretty tough to get to and survey, so we appreciate working with the interagency team and all our partners to make it happen.”

The continuing conservation measures for this endangered species and its habitat include the following: assessment of the remaining habitat, insect pheromone treatments to protect trees,  conifer seed collection (including storage,and planting), forest stand monitoring/enhancement,  reducing food and habitat competitors, captive rearing with partners at the Arizona Center for Nature Conservation, The Phoenix Zoo, continuing life history and translocation/augmentation research through the University of Arizona, and continuing annual survey monitoring.

Other long-term impacts to Mount Graham red squirrels and their habitat include insect infestations, competition with non-native Abert’s squirrels, and poor cone crops caused by drought, all of which influence population size.

The Mount Graham red squirrel population peaked at about 550 animals in the late 1990s, but typically ranged between 200 and 300 individuals until the 2017 Frye Fire devastated  much of their habitat.