Bear Canyon Lake: Bear Canyon Lake is deep and has a steep shoreline. There is little shallow water, except at the upper end of the lake. Fish using small spinners and lures. If fishing off the bottom, avoid casting out too far where the water is very deep. Bait anglers should try fishing with a worm and bobber. Fly anglers using a float tube or kayak can find solitude at Bear Canyon Lake, especially on weekdays. However, fly-fishing from shore or wading is difficult because the tree line comes right to the water’s edge, and the water gets deep close to shore. Rainbow Trout are stocked once in mid-September. In addition, Arctic Grayling have been stocked in the past two years which should add more opportunity for anglers looking to check that fish off of their bucket list or AZ Trout Challenge list. Check out Bear Canyon Lake as your late summer and fall fishing paradise.

Catchable sized Rainbow Trout are only stocked in the spring, but may persist this year due to fire closures restricting access and angling pressure here. Late summer water quality measurements were poor, suggesting fishing may not be productive until cooler temperatures and cloudy days decrease algae blooms. The lake also currently contains illegally introduced Green Sunfish and Largemouth Bass; anglers are encouraged to catch and remove these species to help control their populations. There is no limit for bass and sunfish here.

Because of the difficult access, this lake is popular with float-tubers. Its deep canyon and well-forested edges make this lake a cool respite during the summer. Some lures to try are Kastmasters, Panther Martin spinners and Rapalas for stocked Rainbows and wild Brown Trout. Fly-fishermen should try wooly buggers or wooly worms in black or brown colors, crayfish-colored patterns, and brown or black Simi Seal leeches, peacock ladies or other large streamers. Chevelon Canyon is stocked with fingerling trout in the spring and managed as a put-and-grow fishery.  Chevelon Canyon Lake is a hike-in or ATV accessible lake only, with a two trout limit and artificial fly/lure only regulations. As fall progresses, be careful of spawning Brown Trout upstream of the lake in Chevelon Creek. Try not to target fish on redds or step on redds in the stream. This lake has a great population of wild browns. Protecting spawning fish will allow these populations to thrive.

: As daytime temperatures cool, water stratification breaks up and trout disperse throughout all depths. Willow Springs is stocked with catchable Rainbow Trout weekly until mid-September and Tiger Trout were stocked in May, June, and August. Large numbers of trout remain uncaught into the fall and continue to provide excellent opportunity for anglers. Try Kastmasters, small Rapalas or Panther Martins for either species. Shore anglers fishing for trout can try nightcrawlers or PowerBait. Green sunfish and Smallmouth Bass were illegally introduced to this lake. Try a small hook with a worm under a bobber, even during the hotter parts of the day. 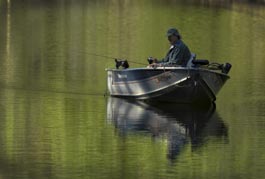 Just like at Willow Springs Lake, water temperatures should be mixing and letting fish move freely into deep water. Large numbers of trout remain uncaught into the fall and continue to provide excellent opportunity for anglers.  If fishing for trout from shore, try PowerBait or worms. Fly anglers may have luck on dry flies or small nymphs right at sunset. Boaters can try trolling a Super Duper or tiny gold Kastmaster lures. The lake is loaded with crayfish; try fishing for large trout with spinners or lures that imitate crayfish patterns. Fish for illegally stocked green sunfish along the rocky shore with nightcrawlers. Woods Canyon Lake is stocked weekly throughout September with Rainbow Trout and was stocked in May, June, and August with Tiger Trout.

Though Becker Lake experienced several small fish kills due to high water temps during the summer of 2021, fishing is still expected to be good this fall. Becker Lake can only be fished with artificial flies and lures with a single point barbless hook, catch and release trout only. Big Rainbow and Tiger Trout lurk along the weed beds on the south end, but can be found in the middle of the lake by boat and float tube as well. Flies to try are midges, Prince Nymph, brown Montana stone and KP bugger. There is limited opportunity for shore fishing and wading especially due to low water, but there is a floating fishing pier that is handicapped accessible. Spin fishermen can try Z-rays, small Kastmasters or Panther Martins with the treble replaced with a single point barbless hook.

In early fall, fishing is best in the morning before the wind picks up and evenings after the monsoon storms have passed. In late fall when daytime temperatures are cool, all day can be very productive. A 2021 spring fish population found Rainbow Trout only 15 inches and greater. Illegally introduced Largemouth Bass can also be found in this lake and anglers are encouraged to harvest bass to help the trout populations.

Cooling daytime temperatures and afternoon monsoon storms are helping to break up algae blooms and improve visibility in Big Lake. Big Lake is not deep enough to develop a thermocline and cannot “break up” in the fall. Murky water and poor visibility are due to algae blooms, not sediment being disturbed from the bottom. Anglers should see increased bite as the weather cools and trout become more active.

Bait and shore fishermen can try anything from worms to PowerBait. Fishing from a boat is generally more successful in the early fall than fishing from the shoreline, when the fish move into deep, cooler water. As temperatures cool, trout will be found in shallower water, but shore angling remains difficult due to low water levels. Boaters should try trolling spinners and flies. Rainbow Trout often forage on bottom, while Cutthroat may be a couple feet higher in the water column. To attract Cutthroat, use lures that resemble crayfish or their movement. Brook Trout will hit flies, but also try nightcrawlers on the bottom.

Launching a boat at Big Lake will be very difficult this fall as low water levels due to lack of winter snowfall were not increased by monsoons. Small boats may be able to launch at South Cove, but will not be able to launch a Railroad or the Main boat launches. Anglers with canoes, kayaks, or float tubes will be able to use any ramp.

River typically will have the most water, the longest into the fall before filling again.  Water rights are owned by the irrigation company and the lake levels get extremely low during the summer. When the lakes begin filling again in the fall, fish near the inflows where the water is the most fresh. Try insect and crayfish mimic flies and lures flowing in with the fresh water.

Trolling flies, such as brown or black wooly buggers, or spinners is likely to work well in River Reservoir. Fly fishermen should try the upper end of River Reservoir where the river comes in and the lake is shallower. Sometimes there’s good surface action in the evenings; try hoppers or nymphs under a hopper in the early fall when insects are active. As fall progresses, be careful of spawning Brown Trout upstream of the lake. Try not to target fish on redds or step on redds in the stream. This lake has a great population of wild browns. Protecting spawning fish will allow these populations to thrive.

Launching a boat at at any of the Greer Lakes will be very difficult this fall as low water levels due to lack of winter snowfall were not increased by monsoons. Anglers with canoes, kayaks, or float tubes will be able to use any ramp.

Carnero Lake is extremely low this year due to lack of winter and spring snowfall. Due to low water levels, Carnero Lake was not stocked in spring 2021. Poor water quality caused a complete fish kill during the summer. Avoid Carnero Lake until the lake refills and the Department restocks, which will hopefully occur in spring 2022.

See the pdf file for the remainder of the lakes in the White Mountains region: