The lake level is down at least seven feet and launching larger boats is still happening, but it may require the use of a push pole or creativity with the trolling motor to reach the main lake.

As the fishing enters into the spring time anglers can expect water temperatures to begin to rise.  Recent surveys show that the Largemouth Bass population at Arivaca Lake is in great shape and there are a good number of fish in the larger size classes.  Arivaca can be tough to fish if you’re not accustomed to the aquatic vegetation that grows thick at this lake.  Various plastics are a good choice this time of year. Whatever bait you choose make sure it’s weedless to combat the thick aquatic vegetation.  Bass anglers that focus their search along the edges of the weedline and in the various “holes” in the thick vegetation tend to be the most successful.

Both the Bluegill Sunfish and Redear Sunfish populations are in good shape and anglers should see a rise in their activity as well as water temperatures increase.  This is an excellent lake to introduce youth to fishing as the sunfish are high in numbers and size (over a pound). A mealworm or nightcrawler on nearly any shoreline will provide fast action.

Draining of Cluff Ranch Pond 3 occurred this winter to replace the dam valve. Some anglers caught some very large sized Largemouth Bass before it went dry. Unfortunately, a high number of Common Carp were observed also; please do not move fish from other waterbodies! It’s not good for you as an angler for several reasons.

Cluff Pond 3 had a larger than expected amount of accumulated sediment that will be dredged in the coming weeks. Afterwards, large cottonwood and mesquite trees will be placed in the bottom of the pond as fish habitat prior to refilling. All of the work is anticipated to be completed this spring.

Once the pond is refilled and water quality is acceptable, Largemouth Bass and sunfish species will be stocked and a catch and release regulation will be in place until January 1, 2023 to allow the fish to establish a self-sustaining population.

Rainbow trout should be first on the list to fish for at Dankworth Pond this spring. In addition to its regular allotment of fish, Rainbow Trout from Cluff Pond 3 have been diverted here as well. Various baits and lures will catch trout, such as: Powerbait, salmon eggs, nightcrawlers, mealworms, and corn. Lures proven to work include: small spinners (size 0-1), spoons and even small jigs tipped with various plastics imitating worms, minnows or creatures. A good rule of thumb for all fish is having a variety of baits/lures in different sizes and colors, placing it in different depths and retrieving it at different speeds. Continue to change until you find a combination that works. Fishing early in the morning or late in the evening generally will lead to more success.

Look for largemouth bass and bluegill sunfish seeking shallow water for spawning. Bluegill can be caught using pieces of nightcrawler, mealworms or small plastics. If you’re using a bobber, remember to only use one large enough to float your weight and hook. Often too large of bobbers are used and fish feel the resistance of the large bobber and steal your bait without you ever knowing.

Frye Mesa Reservoir presents a unique opportunity to catch a native gila trout. The reservoir receives retired broodstock from Mora National Fish Hatchery as well as our state hatchery. The most recent stocking was last fall with a total of 80 fish averaging over 20 inches! This is one of the very few places in Arizona to catch this rare species. Gila trout can be caught with similar methods used for rainbow trout. Fly fishing with nymphs or wet/dry flies is productive. If using a spin casting reel, small spoons and spinners as well as Powerbait or worms can work. The road to the reservoir is rough and a higher clearance all-wheel drive vehicle is recommended. The daily bag limit is two trout.

As the fishing enters into the spring time anglers can expect water temperatures to begin to rise.  Although the higher elevation at Parker Canyon can lead to a delay in the water temperatures warming up expect that as water temperatures move towards 60° Largemouth Bass will become more active in shallow water as they prepare for the spawn.

Sunfish also become more active during this time of the year and Parker Canyon has good populations of both Bluegill Sunfish and Green Sunfish.  Anglers can also expect to find the occasional Redear Sunfish as this species is present but not in as high numbers as the other Sunfish species. A recent survey showed that Bluegill Sunfish opportunities peak in May. Sunfish anglers should use live worms and mealworms.  Vary the depth you fish at until you find where the fish are hanging out. During the heat of the day plan to fish a little deeper as the fish will be looking for locations of decreased sunlight as temperatures rise.

Channel Catfish are still less than active during this time period as water temperatures are still too cool for their liking.  However they can still be caught by anglers using prepared catfishing baits, chicken livers and frozen shrimp.

Anglers can also expect the stocked Rainbow Trout to remain active during this time.  The last stockings for the season will occur in March however a last year anglers were successfully catching trout into July at Parker Canyon Lake. Almost 30,000 trout have been stocked this season! Look for schools of trout cruising in the bays and target them using small spinners and spoons. Water temperature is key during this time of year as the upper layer of water begins to warm expect trout to move into deeper water where water temperatures are cooler.

See the file for the remainder of the lakes in the Southeast Arizona region: 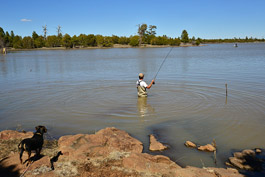 The last trout stocking before the warmer Spring/Summer season usually occurs the first week of March.  Trout can be caught through the spring (March, April, and May) but the bite continues to dwindle as the water warms up.  When the water temperature goes up the warm water species really start to get active. The Largemouth Bass, Channel Catfish, Crappie, and Bluegill bite increases with the warming.  Largemouth Bass can start to spawn when the water temperature reaches 60° F, which can be late February thru May depending on the weather patterns. The nests can be easily seen just walking the shoreline. Target the bass near the submerged vegetation which is spread all over the lagoons, or the nests in the shallow water. If you are using a small boat or float tube, fish the edges of the islands. The water inflow areas are an excellent spot to fish. With as mild as this winter has been, look for the overall bite for these species to occur earlier than usual. There is an entrance fee at Dead Horse Ranch State Park which is currently $7 per vehicle (1-4 adults) and $3 for an individual (walk in/bicycle) and the hours are 8 a.m. to 10 p.m. Seasonal hours may apply and will be posted at the entrance.

See the pdf file for the remainder of the lakes in the North Central Arizona region: