State regulations to help prevent the spread of quagga mussels and zebra mussels went into effect in 2009 and were updated July 2013.

These regulatory measures, known as “Director’s Orders,” were authorized by the Aquatic Invasive Species Interdiction Act passed by the Arizona Legislature in 2009. They give the State of Arizona, particularly the Arizona Game and Fish Department, the authority to identify and assess those species considered aquatic invasives, identify the waters that are affected by those invasives, and establish mandatory conditions for moving watercraft and other equipment from those waters.

Quagga mussels were first found in Arizona in Lake Mead in January of 2007. They originally came from Eurasia and became established in the Great Lakes in the 1980s. Since being discovered, these prolific invaders have spread rapidly. A single adult quagga mussel can produce up to one million larvae in a single year. They colonize rapidly on hard surfaces and can ruin boat motors and clog water intake structures, such as pipes and screens, thereby impacting pumping capabilities for power and water treatment plants. Invasive mussels such as quaggas and the closely related zebra mussels have cost industries and businesses in the Midwest hundreds of millions of dollars in maintenance and damage repair.

Boaters in Arizona have done a good job so far of voluntarily practicing “clean, drain and dry,” along with waiting five days before visiting another lake,” said Tom McMahon, invasive species coordinator with the Arizona Game and Fish Department. “Now Arizona has Directors Orders in effect requiring boaters to follow those practices at lakes known to have quagga mussels, which now includes Lake Powell.”

What are quagga or zebra mussels? 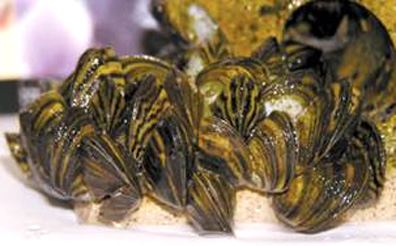 Quagga mussels (dreissena bugensis) and zebra mussels (dreissena polymorpha) are freshwater, bivalve mollusks that have invaded North American waters. Quagga mussels were detected in Lake Mead in early 2007 and are now found in several other Arizona waters. Zebra mussels have not yet been detected in Arizona waters. Despite some minor morphological and ecological differences, both species are very similar and pose a significant threat to our waters. The quagga mussel shell is striped, as is that of the zebra mussel, but the quagga shell is paler toward the hinge. Overall, quaggas are rounder in shape, while zebras are more triangular and can be flat on one side.

Where did quagga or zebra mussels come from?

Quagga mussels are native to the Dneiper River drainage of the Ukraine. Zebra mussels are native to the Caspian, Black, and Azov seas of Eastern Europe. These exotic mussels were first discovered in the United States in Lake Saint Clair, Michigan, in 1988 and are believed to have been introduced in 1986 through ballast water discharge from ocean-going ships. Since their initial discovery, zebra mussels have spread rapidly throughout the Great Lakes and Mississippi River Basin states and other watersheds throughout the eastern and central United States. Quagga mussels have not spread as extensively.

How did these invasive mussels get to Lake Mead?

The invasive mussels found in Lake Mead in 2007 were 1,000 miles farther west than any other known colony of zebra mussels at the time. The primary method of overland dispersal of these mussels is through human-related activities. Given their ability to attach to hard surfaces and survive out of water for extended periods, many infestations have occurred by adult mussels hitching rides on watercraft. The microscopic larvae also can be transported in bilges, ballast water, live wells, or any other equipment that holds water.

What do they eat?

They are primarily planktonic feeders. One individual mussel can filter up to a liter of water per day through their siphon.

Why should we be concerned about these mussels?

These mussels are filter feeders that consume large portions of the microscopic plants and animals that form the base of the food web. The removal of significant amounts of phytoplankton from the water can cause a shift in native species and a disruption of the ecological balance of the lake.

These mussels often settle in massive colonies that can block water intake and affect municipal water supply and agricultural irrigation and power plant operation. In the United States, Congressional researchers estimated that zebra mussels alone cost the power industry $3.1 billion in the 1993-1999 period, with their impact on industries, businesses, and communities more than $5 billion.

Mussels were only found in one area of Lake Mead. How can that become a problem?

Do these mussels have any predators?

These mussels do not have many natural predators in North America, but it has been documented that several species of fish and diving ducks have been known to eat them. They are also a food item for some molluscivore fish, such as redear sunfish.

What can I do to help?

It is up to each of us to take extra precautions to stop the spread of these invasive mussels and any other aquatic invasive species. Check out the 'Watercraft Decontamination Protocols' under current AIS Resources for detailed procedures so you, "Don't Move a Mussel".