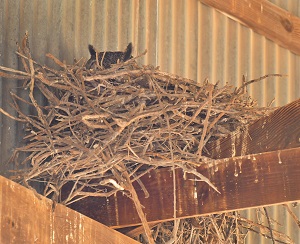 McNEAL, Ariz. — A great-horned owl’s nest, tucked high in the wooden rafters of a pole barn at the Whitewater Draw Wildlife Area, just got a little more crowded.

After patiently sitting on the nest since early February, an adult female has been joined by a pair of nestlings that hatched sometime this week, according to Arizona Game and Fish Department (AZGFD) officials. As the female owl begins to raise her young brood, her mate has been diligent in delivering prey to the nest.

As for the owls, Meyers said both adults soon will share in the feeding of their young, which are expected to fledge (develop wing feathers that are large enough for flight) in nine or 10 weeks, or about early May.