PHOENIX — As a major storm sets its crosshairs on Arizona this week, the Arizona Game and Fish Department (AZGFD) reminds hunters, anglers and other outdoor recreationists to be prepared before heading out. 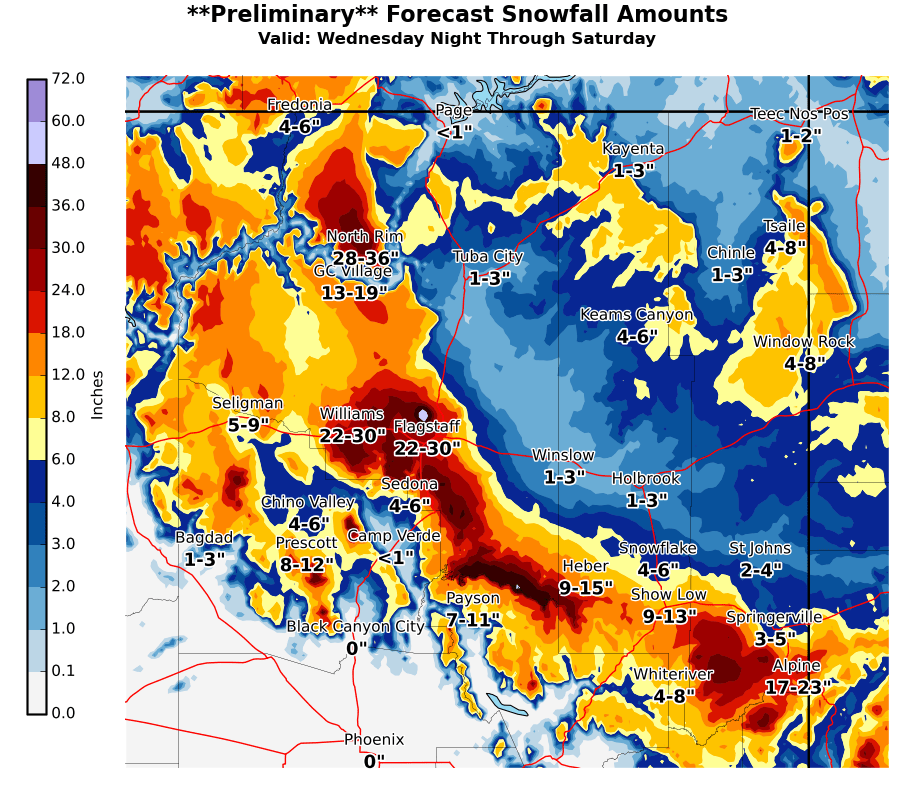 A preliminary forecast model of potential snowfall amounts from Wednesday, Nov. 27 through Saturday, Nov. 30. This model was issued by the National Weather Service in Flagstaff and was current as of Monday, Nov. 25.

The National Weather Service expects the storm to produce significant rainfall at lower elevations and several inches of snow in the high country, just as some elk hunters are expected to begin their hunts.

Some U.S. Forest Service roads may be closed or under special restrictions because of the incoming storm. Please contact the appropriate land management office ahead of time for the latest information on any road closures and restrictions.

“Hunting is already an exciting challenge on its own, but if you’re not prepared when a cold, wet storm is barreling down upon you, it can be downright dangerous,” AZGFD Wildlife Manager Erin Brown said. “That’s why it’s important to check the extended weather forecast before heading out and to be prepared with adequate food, water, a shovel and other supplies. Dirt roads can become impassable when deep snows hit the high country and can become quagmires at the lower elevations when heavy rain hits.”

In addition, those heading outdoors should carry:

Torrential rains can cause flooding along rivers, streams, washes and arroyos throughout the state. Once a storm passes, muddy or snow-laden roads can remain a challenge and driving on them can cause habitat damage or cause vehicles to become stranded.

It may also be difficult or impossible to remove trailers or other equipment from forested or other areas following a heavy snowstorm.