Fair Chase is the ethical, sportsmanlike and lawful pursuit and taking of free-range wildlife in a manner that does not give a hunter or an angler improper or unfair advantage over such wildlife.

Fair Chase has been embraced as the proper conduct of a sportsman/sportswoman in the field and has been taught to new hunters for more than a century. It pays respect to the traditions of hunting and angling by emphasizing the development of an individual’s skills rather than reliance on practices or technologies that overwhelm the quarry’s ability to elude detection or take. In many situations, Fair Chase is not something that is enforceable by law.  Rather it should be guided by each person’s own ethical compass, which compels them to do the right thing when no one else is watching—even when doing the wrong thing is legal.

“Fundamental to ethical hunting is the idea of fair chase. This concept addresses the balance between the hunter and the hunted. It is a balance that allows hunters to occasionally succeed while animals generally avoid being taken.” –From Beyond Fair Chase, by Jim Posewitz p.57 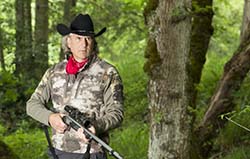 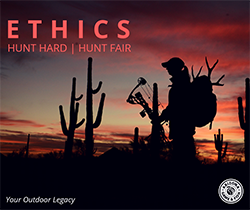 New technology developments impact almost every aspect of life, and sportsmen may wonder how hunting is affected as new equipment hits the market. Advances in technology are inevitable, and there always will be a better way to craft a bow, firearm or ammunition and a multitude of hunting and angling accessories. However, in terms of Fair Chase, the line is drawn when that advancement becomes unlawful or provides sportsmen with an improper or unfair advantage.

As examples, three recent technological advances have been the smart rifle, drones, and trail cameras. Hunters in Arizona should be aware that:

Why I hunt – food and hunting,  Randy Newberg

The Commission recognizes that development of new or improved technologies and practices can provide benefits to hunters and anglers by improving competency or increasing participation. However, it also believes that the pursuit and taking of wildlife should be managed to conform to the ethical standards of Fair Chase.

Commission consideration of whether a given technology or practice should be limited or prohibited in the interests of preserving Fair Chase will be carefully weighed in an open public process.

The importance of Fair Chase

Public support of Fair Chase and ethical hunting is critically important to the survival of hunting and angling. These pursuits are the cornerstones of the North American Model of Wildlife Conservation and are the primary source of funding for conservation efforts in North America.

“In any democracy, society decides what is acceptable or unacceptable, and therefore what stays and what goes. Hunting traditions are potentially at risk if the majority of citizens develop a negative perception of hunting, whether this perception is justified or not. Ethics may be a matter of choice, but the actions of individuals can come to represent the entire group and it is important that hunters understand this.” – The Boone and Crockett Club on Fair Chase, 2016

The support of Fair Chase and respect for the traditions of hunting and angling are every sportsman’s responsibility. So remember, Hunt Hard, Hunt Fair.