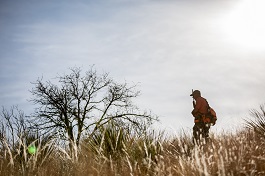 This is a Gambel’s quail year! If you’ve ever wanted to try quail hunting in Arizona, this is your year! You may not even need a bird dog (though admittedly they’ll make hunting quail easier) because there are Gambel’s quail all over our desert landscapes this season.

For seasoned quail hunters, here’s a great opportunity to introduce a new hunter to the fun that is quail hunting. We think you’ll find that you enjoy watching someone else learn to love the challenge of the hunt as much as you do. So go ahead and invite that friend who’s on the fence about hunting but would love to harvest their own meat, or take a grandchild, a child, or someone who enjoys watching the dogs hunt for quail. Talk to your friends and family about why you love quail hunting and your enthusiasm is sure to spark some interest!

When you go, teach by example with ethical hunting practices, like only taking a few birds in a covey (so the others can keep making more for later), talk about the valuable role hunters play in conservation, and how you enjoy harvesting and eating clean, organic meat. Maybe you love the fancy dishes and tasty stews made with quail, maybe you enjoy the time out hiking some of the most beautiful and rugged country in the Southwest, or maybe you just enjoy working with your dog when it goes “birdie” … whatever the reason, get out and enjoy the desert quail season!

We have enjoyed two consecutive winters with above-average precipitation. For those of you who are long-timers in Arizona, this is something we haven’t seen in a long time. But what does it mean for Gambel’s quail? All of the breeding call count surveys this spring were up — way up. All of the long-term quail survey routes in southern Arizona reported at being 1.5 to 2 times the recent 10-year average. These are numbers not seen since the 1990s.

The newer routes in the central and northwestern portions of the state reported their highest numbers yet, with most being twice as high as what has been recorded in the past five years.  Our added winter moisture and active calling period led to a very long nesting and hatching season, starting in late April and extending into early summer, with chicks hatching as late as early July.

Taking everything into account, this will be a great season compared to what we have experienced in the last 15 or more years. But taking the long view on this one (and the older seasoned quail hunters will agree), this season will actually be what an average year used to look like in Arizona.

From a population standpoint, we are out of a deficit for the first time since 2001-2002. Quail are starting to pop up in places they haven’t been seen in a while. If you’ve never had the chance to experience what Arizona quail hunting built its name on, this is the year to get out and enjoy it.

Good winter precipitation also fell in scaled quail country, and we received several good reports on the hatch this spring and summer. However, weak monsoon patterns likely reduced the number and size of scaled quail coveys such that their numbers will remain average in the southern reaches of their range and perhaps be less than average north of Interstate 10 since monsoonal patterns did not strengthen.

The 2020 monsoons were infrequent, spotty, and relatively weak across southern Arizona. Mearns’ quail depend on monsoonal moisture, and timing and location of rainfall also influence their nesting success and population numbers. So the birds are likely to be abundant only in pockets that received good precipitation this summer.

With an expected high carry-over of juveniles from last year, birds should be plentiful in some areas and numbers will be more mediocre in other areas that received less rainfall. Try hunting areas that see lower hunter visitation this year and you’ll likely see success. 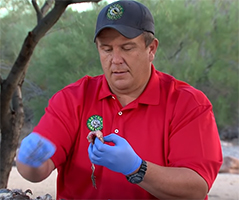 Check out Johnathan O’Dell’s video: How to clean quail

Tips in the COVID-19 Era

If you’re traveling from out of state, or even within the state to hunt quail, here are a few helpful tips to make it the best experience it can be this year: