In Arizona, two bison herds are managed by the Game and Fish Department; the Raymond herd on Raymond Wildlife Area, located east of Flagstaff, and the House Rock herd, located on the North Kaibab and House Rock Wildlife Area.

Bison are an American conservation success story and an icon of wildlife conservation. In 2016 to commemorate it’s storied past, bison were recognized as the official U.S. mammal. National Bison Day is recognized annually on the first Saturday of November.

Are Bison Native to Arizona?

Several recent studies in the southwest have concluded plains bison are native to the southwest, placing northern and eastern Arizona within the species’ historical continental range. The Department of the Interior (DOI) Bison Conservation Initiative, included areas at the edge of the species’ historic range such as the Grand Canyon region. Also a review of the status of the American bison by the International Union for Conservation of Nature (IUCN), considers the Kaibab Plateau area within the west-southwestern edge of bison historic range.  When bison ranged into Arizona in the past, they likely occurred in very low numbers and were also likely absent from Arizona over long periods of time historically, as evidenced that no bison were recorded during Arizona’s settlement period of the 1800’s.

Based on the evidence and consistent with it’s long-term management of bison as wild big game in Arizona, the Department’s position is that bison are native wildlife within their original historic range in Arizona. The collective evidence is consistent with what would be expected from a species at the southwest edge of its original continental range.

When were Bison Reintroduced to Arizona?

In 1906, a former bison hunter and rancher named Charles “Buffalo” Jones trailed 87 bison about 175 miles from Utah to the Kaibab Plateau. This area at the time was set aside by President Theodore Roosevelt in a proclamation known as the “Grand Canyon Game Preserve”. Jones personally caught most of these bison as calves in the 1880’s from the last remaining wild bison herds from the Texas panhandle and northeast New Mexico. The Grand Canyon Game Preserve was “set aside for the protection of game animals and shall be recognized as a breeding place.” The early writings specifically mention “buffalo” as part of the game animals to be managed on the Kaibab Plateau.  The Preserve included the land, and predated the establishment of both the Kaibab National Forest and Grand Canyon National Park.

The state of Arizona purchased the remaining bison from Jones’s original bison in 1927, which total 98 animals. Descendants of these bison form the core of what is now the House Rock herd. A second herd of bison is also located at the Raymond Wildlife Area.

The House Rock bison herd currently consists of two subpopulations; the original bison Jones brought to the Kaibab Plateau and a new second group on House Rock Wildlife Area (HRWA). The original group Jones crossed with cattle over 100 years ago and still today they have detectable levels of cattle genetics. Even so, these wild and free roaming bison still look and act like bison and spend most of the time on Grand Canyon National Park. A new subpopulation of bison are on HRWA and were donated to Arizona by the American Prairie Reserve in northeastern Montana in 2017. These bison are not descendants of any cross with cattle and are descended primarily from the last wild caught bison in Montana known originally as the Pablo/Allard herd.

HRWA is located on the eastside of the Kaibab Plateau, in the southern end of House Rock Valley and about 25 miles southwest of Cliff Dwellers Lodge. To get there turn south of U.S. Highway 89A at Mile Post 559.8. It is 20 miles south on BLM road 8910, which is a maintained gravel road.  HRWA is around 53,850 acres in size on the Kaibab National Forest.  Elevation varies from 5,300 feet to 8,000 feet. The Kaibab deer herd winter on HRWA and pronghorn are year round occupants.

The Raymond Bison Conservation Herd found on Raymond Wildlife Area (RWA) were donated to Arizona in 2017, through a first of its kind partnership between a state wildlife agency and the federal Department of Interior – Wind Cave National Park in South Dakota.  The Wind Cave bison lineage contain rare and unique bison genetics not found in other public bison herds and have no detectable cattle genetics.  The Department manages the Raymond herd with other Wind Cave bison lineages in other states to form a metapopulation of at least 1,000 bison; protecting the lineage from inbreeding and genetic loss out to some 200 years.

RWA is located about 20 miles east of Flagstaff. Travel on I-40 to Buffalo Range exit 225. Proceed south of I-40 following the signs approximately 10 miles to the RWA headquarters. Bison have been continually present on RWA since 1945 and have numbered as high as 358 bison. A management decision was made to remove the original Raymond bison which contained cattle genetics. The new Raymond Conservation bison herd will be allowed to grow out towards 100 adults. RWA is 14,637 acres in size and range in elevation from 5,500 ft to over 6,700 ft. Pronghorn, elk, mule deer and about 50 other wildlife species can be found on RWA. 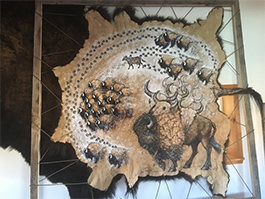 This bison hide records the storied past of Plains bison from tens of millions to less than 1000, and their recovery from near extinction. Most that survived were crossed with cattle (but not all). The hide shows where two distinct linages of bison are managed in Arizona. This display travels to Information and Education events to inform the public about bison management in Arizona.