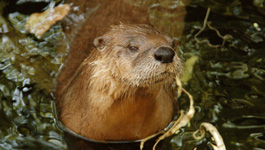 Wonderfully adapted to an aquatic existence, the otter’s elongated body terminates in a streamlined tail that tapers from a thick base to a pointed tip. Also contributing to the otter’s fusiform shape is its flattened head and small ears, the openings of which can be closed at will. The legs too are short, and the hind feet are webbed to the toes. The color of the densely furred coat is a rich chocolate brown with whitish underparts. Adults generally weigh from 12 to 20 pounds with lengths ranging from about 3 feet to just over 4 feet. The otter’s webbed, rhomboid tracks are easily distinguishable from the also webbed, but elongated hind tracks of the beaver.

Once found throughout the Salt, Verde, Little Colorado, and probably also the Gila, and Colorado river systems, this species was extripated from the state by early settlers. It was reintroduced into the Verde River in the early 1980s and is now common throughout the entire Verde River watershed.

Although most otter activity is at night, hunting is by sight as well as touch, and clear streams appear to be favorite haunts. The otter’s usual fare is fish, waterbirds, turtles, eggs, and crawfish, the latter one of the most conspicuous food item in their droppings.

The breeding season in Arizona is uncertain, but otters elsewhere usually breed in late winter or early spring. Mating usually occurs in the water. Pregnancy lasts about two months, but because of delayed implantation gestation may take up to a year. Dens are located in natural shelters under rocks, logs, flood debris, or in river banks. Litter sizes vary, but usually consist of two or three pups. Weaning requires approximately three months, after which the young disperse.

Although old photos show these animals being trapped and otherwise taken for their pelts prior to 1930, historically they were never numerous enough to be an important fur resource. Today, as a result of the transplant efforts in the early 1980s, otters are very common and may someday soon be managed as a furbearer with a limited number of animals be eligible to be taken by trappers.