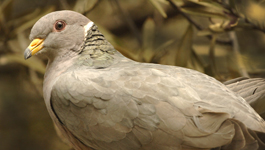 Band-tailed pigeons are sometimes confused with domestic or feral pigeons that are often seen in cities and towns. Band-tailed pigeons live in mixed conifer forests, ponderosa pine forests, or in dense stands of evergreen oaks and pines between 4,500 and 9,100 feet elevation. They are about the size of a domestic pigeon, and adults weigh about 8 ounces. Both sexes have an overall blue-gray appearance, and it is only after close inspection that one notices the male’s rosier breast and more iridescence on the nape of the neck. In autumn, adults can be differentiated from their young by the adult’s chrome-yellow bills and feet, white crescent at the nape of the neck, and the dark gray band across the top of the tail that gives the bird its name.

As migratory birds, band-tailed pigeons are only present in Arizona from late March through mid-October. They nest in mixed conifer forests, ponderosa pine forests, or in dense stands of evergreen oaks and pines between 4,500 and 9,100 feet elevation. Breeding starts in May and continues through the summer. Individual birds can nest twice and sometimes three times in a year. A normal clutch is one but occasionally two glossy white eggs, are laid. After feeding on acorns and other fall mast crops, most Arizona band-tailed pigeons migrate to the Sierra Madre Occidental in Mexico to spend the winter months.

Band-tailed pigeon hunting has an erratic history in Arizona. After the season was closed in 1951 for a perceived lack of birds, interest in band-tailed pigeons waned until the 1960s, when a series of studies were initiated in the “four-corner” states of Arizona, New Mexico, Colorado and Utah. These studies included an experimental season, which opened in 1968, and continued through 1972. Hunt information showed a limited but dedicated interest in the band-tailed pigeon as a game bird with the maximum number of hunters and birds harvested being 1,067 hunters and 3,545 pigeons in 1970. The numbers of both pigeons and pigeon hunters has since fallen off with only 146 band-tailed pigeons reportedly taken in 1996.