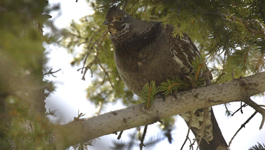 Dusky grouse are named after the bluish-gray appearance of the male. In Arizona grouse are found in the mixed conifer and aspen forests above 8,500 feet. As a consequence, these birds are only found in the White, Blue, Escudilla, Chuska, and Buckskin (North Kaibab) mountains, and on the San Francisco Peaks where they were introduced in the mid- 1970s. An additional transplant effort is underway to establish dusky grouse on the Mogollon Rim. Males are measurably larger than females, 2-year-old “cocks” weigh up to 3 pounds as opposed to the adult female’s average weight of between 1.75 to 2 pounds. In comparison, first year birds or poults typically weigh only 16 to 28 ounces during the early days of the September hunting season.

Dusky grouse in Arizona do not migrate downhill during the winter months as they do in the more northern states. Instead, they spend the winter roosting in Douglas-fir trees, subsisting on needles until spring when the males form small “leks” or strutting grounds, which they occupy from April through June. Oftentimes these leks are located on a fallen log or in a small clearing in the forest, where the cock attempts to engage any hen that comes his way with soft “hooting” displays and “flutter flights.” The peak of mating activity usually takes place during the last part of May or the first week of June, after which the male goes off to leave the hen to nest and raise the chicks on her own. Most broods are hatched between mid-June and mid-July during which time the hen and poults feed primarily on forbs and insects. The average brood size is four to six and the young stay with the hen through the fall months. Fall usually finds the hens and poults at the edge of mountain meadows, raspberry patches and in old burns feeding on forbs and berries. The males, now solitary, tend to favor aspen thickets and other dense cover.

The first legal season on dusky grouse in Arizona did not take place until 1964 when 33 hunters spent 49 days to harvest 44 grouse. Since that time, a variety of grouse season dates have been authorized, but the number of grouse hunters has remained low due to the birds general scarcity and the steep terrain and high elevations of their habitat. Hunter numbers have never reached 800 in any given year, and the annual harvest since 1973 has been only 300 to 700 grouse.