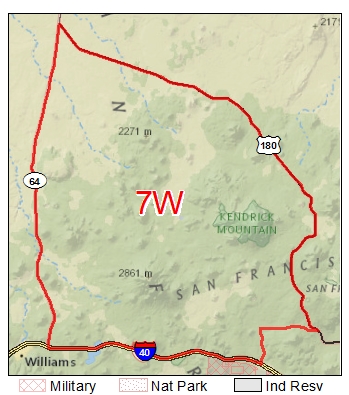 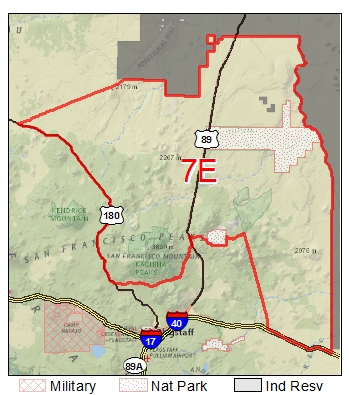 Hunters are encouraged to check with any of the following agency offices to get the latest information and current conditions as their hunt approaches.

The majority of Unit 7 is open to hunting but there are parcels of private property that are posted “No Trespassing” and/or “No Hunting”. There are many remote subdivisions throughout the unit and it is the hunter’s responsibility to know where they are at all times.  Be sure of your background when shooting – houses can be obscured by vegetation and topography. Remember, it is unlawful to shoot within 1/4 mile of occupied structures when hunting.

Also, some private ranches are signed as “closed to off-road travel”. Be sure to respect the wishes of landowners. Such respect is critical in keeping private land open to hunting.

NOTE: With the implementation of the USFS Travel Management Rule, motorized retrieval of pronghorn is not allowed on Coconino and Kaibab National Forest lands. It is also important to note that the general season begins October 2nd, instead of the normal start date of September 4th. Please refer to the hunt regulations for details

Overview: Antelope can be found in most of the habitat types in Unit 7 including forested areas however, the majority of the antelope will be found in the open grasslands and parks scattered throughout the unit. Areas: Within the ponderosa pine type, pronghorn can be found in open meadows and parks such as Government Prairie west to Highway 64, west and north of Kendrick Peak, and north and east of the San Francisco Peaks. Antelope are also found in the areas surrounding Merriam Crater. Antelope can be found extending out from the Ponderosa Pines to the Pinion Juniper habitat and the lower elevation grasslands that make up much of the northern parts of both units 7 East and 7 West.

Hunters should spend considerable time scouting prior to the season to locate herds. Antelope can often be difficult to find in unit 7 because they frequently stay in the trees. Be aware that antelope will move in response to the “green up” from the summer monsoons. Antelope located in the early summer will likely have moved before the hunting season. Cinder cones and other high points in open grassland can afford hunters wide views for searching with binoculars and spotting scopes for pronghorn. Be aware that motorized cross country travel is prohibited due to the Travel Management Rule, including cinder cones, unless a road is present and is on the Motor Vehicle Use Map.

NOTE: With the implementation of the USFS Travel Management Rule, motorized retrieval of black bear is not allowed on Coconino and Kaibab National Forest lands.

Overview: The opening of the Unit 7&9 bear hunt was moved from late to early October in 2006. This was to be consistent with other bear hunts and the new Hunt Guidelines. It is also important to note the Unit 9 and Unit 7 are no longer managed jointly. They now have separate female harvest limits.

Areas: In the fall, male bears can range over wide areas and may occur in any forested or woody habitat in the unit. The majority of bear sign will likely be located near the San Francisco Peaks, Kendrick Mountain, and Sitgreaves Mountain. Generally speaking, bears in Unit 7 are not tied to a localized food source, but feed over a wide area. The main reason for this is a lack of Gamble oak stands. Bears often feed on ants, beetles, and grubs in decayed logs and under rocks. Bears may also feed on green forbs/grasses that are widely distributed. If you locate an area where a bear is active, try predator calling or sitting at waters sources containing bear sign.

SPECIAL REGULATION: All successful bear hunters must contact the department within 48 hours of harvest and present the head, hide and attached proof of sex within 10 days. Refer to the Hunting Regulations for details.

NOTE: With the implementation of the USFS Travel Management Rule, motorized retrieval of elk is allowed on Coconino and Kaibab National Forest lands within Unit 7.

Overview: Elk can frequently be found in most of the habitat types in Unit 7. Elk are not typically found in the open, low elevation grasslands north and east of the Peaks. Elk are located on their summer range during most of the hunts. The highest densities of elk are located in the ponderosa pine forests above the pinion-juniper habitat type. However, elk are sensitive to food availability and will move to lower elevations if summer rains improve forage conditions there. Burned areas appeal to elk, but the animals usually abandon such open sites before or after the first day of the hunts.

Elk will normally stay on summer range until significant snowfall (18-24”), pushes them out onto the winter range generally to the northern portions of the units. The bulls can usually be found on their winter range earlier than cows.

Elk densities in unit 7 and particularly in 7-E have been reduced over the past 12 years due to concerns over aspen regeneration. The lowest number of permits offered in 7-E occurred in 2006, but permit numbers have been increasing due to higher calf crops and above guideline bull ratios. Conversely, the highest number of tags for 7-W occurred in 2006.

7-E: The Hochderffer Hills, White Horse Hills, Saddle Mountain and west and north of Maverick Butte. Elk can be found in areas from Maverick Butte east to O’Leary Mountain. Higher elk densities can be found along the edge of the Kachina Peaks Wilderness. As stated above, with the current lower elk densities in 7-E, scouting prior to your hunt will be crucial to being successful.

7-W: Government Prairie, Sitgreaves Mountain, Slate Mountain and Kendrick Mountain, out on the lower elevation hills to the west and the southwest corner of the unit near Williams are good places to start. Again, scouting prior to your hunt will greatly improve your chances of being successful.

Kachina Peaks Wilderness Hunt Area: Access is the biggest challenge and learning all of the hiking trails into the wilderness is very important. The main hiking trails are; Kachina, Weatherford, Inner Basin, Humphreys, Aubineau and Bear Jaw Trails. The Waterline Road provides additionally access foot access. These are all great areas to start scouting prior to the hunt.

NOTE: With the implementation of the USFS Travel Management Rule, motorized retrieval of deer is not allowed on Coconino and Kaibab National Forest lands.

The fall over-the-counter archery hunt was reopened in 2010. The December and January archery deer hunts will remain closed in unit 7 due to a high percentage of harvest by archery hunters during the August-September hunt as outlined in the hunt guidelines.

Areas: The first day or two of the hunt, deer densities will be highest in the burned areas in the central part of the unit. Examples of these areas are the White Horse Hills, Saddle Mountain and the Hochderffer Hills. Conversely, hunter densities are also highest in these areas. Mature bucks can be found in low densities at high-elevations on the San Francisco Peaks and Kendrick Mountain as well as the lower-elevation pinon-juniper habitat. For most years, snow during the general hunt will not be deep enough to drive animals into lower elevations however, deer will move into winter range if temperatures fall to the low teens prior to the hunt.

NOTE: With the implementation of the USFS Travel Management Rule, motorized retrieval of turkeys is not allowed on Coconino National Forest lands.

Overview: Wild turkeys occur throughout the ponderosa pine and mixed conifer forests in summer and into early fall (including the spring and fall seasons). Meadows and the edges of grasslands are important to hens and poults seeking insects and for turkeys seeking green herbaceous vegetation when mast is in short supply. The primary mast species in Unit 7 are ponderosa pine, juniper, and pinion pine. Unlike other turkey units around Flagstaff, oaks trees are scarce in Unit 7. When ponderosa pine seed is abundant, the birds can be found throughout the fairly extensive Ponderosa stands in the unit.

High hunt success and high numbers of turkey observed by archery elk hunters over the last few years indicate an increased turkey population in Unit 7. The 2009/10 winter may have temporarily impacted the turkey population in unit 7 although observations during the survey period remain stable.

Areas: Most gobblers will be found around the three prominent mountains in the unit: Sitgreaves Mountain, Kendrick Mountain, and the San Francisco Peaks. Additional places to check for gobblers are the forested hills in the southwest corner of the unit near Williams, also Slate Mountain, Wildcat Hill and north of Slate Lakes. In early spring, the gobblers will often travel to higher elevations where snow covers more than 50% of the ground. If roads are closed because of road conditions, do not hesitate to park and hike the spring. Road closures can improve your chances by reducing competition and interference with other hunters.

In the fall, try most any of the mature Ponderosa stands close to mountain bases and canyons and the edges of all the mountain meadows.

Other Pertinent Climate Information
Unit experiences heavy snowfalls during big winter storms which can be dangerous. If you’re planning a trip, be sure to stay informed about weather conditions, carry a sleeping bag in your vehicle, and keep matches with you at all times.

Major Cities and Towns in or Near Game Management Unit and Nearest Gas, Food, and Lodging
Flagstaff, Williams, Parks, Bellemont

Camping is allowed on Forest Service administered land over most of the unit.

Elevation ranges from 4,200′ to 12,633′. Great Basin desert scrub persists at the lowest elevations in the northeastern corner of the unit. Open grassland and pinion-juniper woodlands occur at about a 1:2 ratio at elevations below the ponderosa pine belt. The San Francisco Peaks support vegetation belts of ponderosa pine, mixed conifer, spruce-fir, bristlecone pine, and alpine tundra. Other volcanic mountains include Kendrick Mountain, northwest of Flagstaff, and Sitgreaves Mountain, closer to Williams. The unit also has numerous hills and cones of volcanic origin.