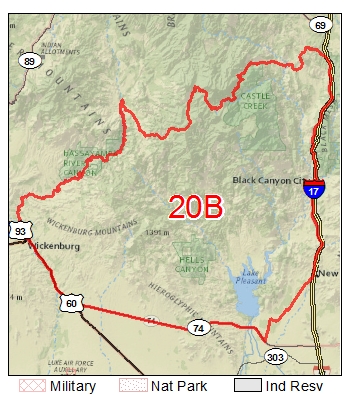 To learn more about the life history of the species featured, log onto azgfd.com and go to the hunting & fishing link, then choose big game species and select from the list of big game species you are interested in.

Overview:
Javelina inhabit the entire unit, but herd densities differ geographically. Javelina are more abundant at elevations between 2500 ft. and 4500 ft.  Javelina are small in comparison to many other big game animals and they blend in very well with their surroundings.  Javelina spend a majority of their time resting and feeding and tend to utilize thick brush and caves or overhangs for bedding areas. When feeding, javelina prefer succulents such as prickly pear, barrel and hedgehog cactus.  They will also take advantage of early winter and spring green-ups in the bottoms of drainages and open slopes.

When searching for javelina, you should spend a majority of your time looking for them with binoculars from a good glassing point where you can see a large basin, canyon or drainage with food, water, and cover within close proximity to one another.  Concentrate your glassing to sunny hillsides and slopes in the early morning and evenings.

The proximity of 20B to a growing Phoenix metropolitan area makes it a very popular destination for a number of outdoor recreational activities.  The further one can get from some of the more popular and used roads into the unit will increase hunt success and should provide for a higher quality hunting experience.

During pre-season scouting trips, concentrate your efforts around water sources such as springs, potholes, stock tanks, and game catchments to check for recent javelina activity. You do not necessarily have to locate the herd itself, but if you locate the herds feeding, bedding, and watering areas you will increase your chance of harvesting a javelina during the season.

Once a javelina has been harvested, care should be taken to dress and skin it as soon as possible. A common misconception is that the scent gland on a javelina’s back must be cut out. This is incorrect. The gland is contained within the skin, and simply skinning a javelina as you would any other animal will completely remove the scent gland. However, be sure not to touch a knife or fingers to the gland then touch the meat.

Overview:
Unit 20B supports a healthy mountain lion population as do much of the central Arizona units. Lions are reclusive animals that spend most of their time patrolling their territory. By far, the most effective lion hunting method is trailing them with hounds. However, lions will respond to predator calls, and hunters using this tactic harvest many each year statewide.

Hunting Tips:
There are very few perennial waters in Unit 20B, but where they do exist; lion sign (tracks, scat, scrapes) is usually found.  Whether you are looking for a place to start your dogs or predator calling, these water sources are excellent places to begin.

Special Regulations:
Unit 20B is included in Mountain Lion Management Zone F. Hunters are responsible for calling 1-877-438-0447 before hunting to determine if any mountain lion management zones are closed. Successful lion hunters must report their kill by contacting an Arizona Game and Fish Department office, or by telephone (1-877-438-0447), within 48 hours of taking a lion. In addition, within 10 days of taking a lion, the hunter shall present the lion’s skull, hide, and attached proof of sex for inspection. A premolar tooth will be removed during this inspection. The premolar tooth (very small) is located on the upper jaw just behind the large canine. Also, it is unlawful to harvest a spotted kitten or a female accompanied by spotted kittens.

Overview:
Mule deer are found unit wide, however, deer densities are higher in the mid-elevation deserts to the Ponderosa Pine forests in the northern portion of the unit. The forested areas have frequent wildfires creating new growth areas that the deer will utilize.  During early season hunts deer, especially mature bucks, activity during daylight hours may be minimal. As day length shortens and the temperatures decrease deer will increase their activity during morning and afternoon hours. The rut and peak breeding occurs during January with December and February showing some breeding activity.

The proximity of 20B to a growing Phoenix metropolitan area makes it a very popular destination for a number of outdoor recreational activities.  The further one can get from some of the more popular and used roads into the unit will increase hunt success and should provide for a higher quality hunting experience.

During these pre-season scouting trips, concentrate your efforts around water sources such as springs, potholes, stock tanks, and game catchments to check for recent deer activity. You do not necessarily have to locate the deer, but if you locate where the deer are feeding, bedding, and watering you will greatly increase your chance of harvesting a deer during the season.  When searching for mule deer, spend a majority of your time looking for them with binoculars from a good glassing point where you can see a large basin, canyon or drainage with food, water, and cover within close proximity to one another.  Concentrate your glassing on hillsides and slopes in the early morning and evenings.  During the day, mule deer generally favor ridges that afford escape routes, favorable visibility and scent-carrying thermal currents that will help alert them to possible danger.

Overview:
Life history- cubs are born during January in winter dens, usually in pairs, but larger litters are not uncommon. The cubs are very small and helpless at birth. Cubs emerge from the den in April and stay with their mother through the first summer and fall, denning with her their second winter. Female black bears in Arizona usually reach reproductive age in their fourth year, and usually breed every other year. Normal reproductive cycles in Arizona black bears may be adversely effected by drought and resultant poor physiological condition. Black bears are relatively long lived animals, with some individuals exceeding 20 years of age. The low reproductive potential of this species is becoming an increasingly important management consideration.  Black bears are characterized as shy, secretive animals possessing considerable curiosity and displaying high levels of intelligence and exploratory behavior. Black bears are generally active in the early morning and late evening; they may alter their activity pattern to exploit sources of artificial food, becoming nocturnal at camp grounds and dump sites. Nuisance activities are nearly always associated with artificial food sources (campgrounds, beehives, garbage sites)

Unit 20B has a healthy, but localized bear population that inhabits the northern most portion of the unit. Black bear sign (tracks, scat, etc) can be found south of Crown King around the Horsethief Basin Recreation Area and associated drainages that connect the ponderosa pine habitat type to the interior chaparral habitat type. Harvesting a bear in Unit 20B is challenging as the better bear habitat in the unit is in rough terrain with dense vegetation.

The Arizona Game and Fish Department relies on accurate reporting by responsible dedicated hunters to ensure the best wildlife management possible and that hunting opportunities for bear remain in Arizona.  Hunters are responsible for checking to see if the hunt is still open by calling 1-800-970-BEAR (2327).  Hunters are also required to contact the Arizona Game & Fish Department in person or by phone at the same number within 48 hours after taking a bear.  In addition, the hunter shall present the bears skull, hide, and attached proof of sex for inspection within 10 days of taking a bear.  If a hunter freezes the skull or hide before presenting it for inspection, the hunter shall prop the jaw open to allow access to the teeth and ensure that the attached proof of sex is identifiable and accessible.

Hunting Tips:
Hunters would have the best chance of harvesting a black bear by calling with a predator call or by pursuit with hunting dogs.  Other methods include glassing open slopes where bears are foraging or still hunting a water source that bears are known to use.

Overview:
Dove numbers have steadily increased in the unit over the past few years. Feeding and nesting activity has expanded northward and it is now common to observe white-wings at the extreme north-end of saguaro distribution during the time of fruit production.  As is often the case, many of these white-wings are moving south by the time the season begins.

Areas:
Although most of the hunting activity has occurred in the agricultural areas south of the unit, there is fair hunting to be had away from these high hunter density areas.

The natural desert areas adjacent to the CAP canal can be very productive during years when there is available seed in the desert for doves to feed on.  Dove flyways also exist adjacent to the Agua Fria and Hassayampa Rivers and around stock tanks and springs north and south of Highway 74.

Pre-season scouting is recommended to become familiar with recent land status changes (privatization, annexation, etc) that may have occurred.  Be respectful of private property and livestock around water sources.

Overview:
Although walking is rough, the foothills of the Bradshaw Mts. offer some of the better quail hunting in the unit.  Concentrate your efforts near permanent water sources (springs, rivers), stock tanks and washes.

Overview:
The coves near the north end of Lake Pleasant hold fair numbers of waterfowl and is conducive to  setting up decoys and calling.  Prior to hunting in Lake Pleasant Regional Park, check the current hunting regulations for restrictions and access changes to the north end of Lake Pleasant off Table Mesa Road.  Desert stock tanks also are excellent places to search for migrating ducks that utilize desert stock tanks as resting and feeding areas.  Be respectful of posted private property as many stock tanks in Unit 20B are located on posted private lands that prohibit trespassing.

Other Pertinent Climate Information
As the Unit’s elevation goes from 1,400 feet to more than 7,000 feet the temperatures and rainfall vary greatly and averages would be is leading. Game Management Unit 20B has a weather pattern that resembles the Mohave Desert. Summer monsoons often produce low average rainfalls and extended droughts are common. Flooding during the winter is common and can greatly influences access to hunting areas.

Major Cities and Towns in or Near Game Management Unit and Nearest Gas, Food, and Lodging

The Phoenix Metropolitan area is just south of 20B. Wickenburg is the nearest service area west of the unit. Black Canyon City and Cordes Junction provide service east of the unit.

Major Highways and Roads Leading To
From the East: Interstate 17 at Table Mesa Jct. and Bloody Basin
From the West: Wickenburg and Morristown
From the North: Bloody Basin Interchange
From the South: Lake Pleasant Regional Park

Undeveloped Campgrounds
Camping is allowed is most of the hunt areas on U.S. Forest Service and BLM administered lands.   Brief Description of Terrain, Elevation, and Vegetation
The unit is well known to be very step and rocky. The Old Cordes area has a very limited desert grassland; the remainder of the unit consists of palo verde-cacti, interior chaparral, pinyon, juniper, ponderosa pine, and limited mixed conifer habitat types.