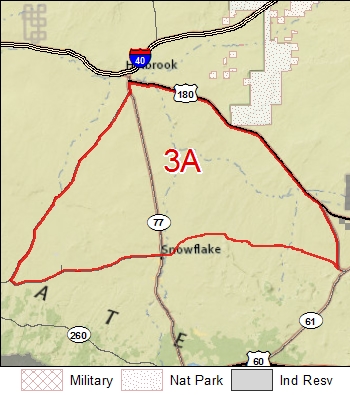 Overview: The unit is comprised almost entirely of habitat suitable for antelope, and finding a place to hunt is not difficult. The animals are well dispersed in open country, but, due to the checkerboard land ownership patterns, hunters should scout prior to the hunt to find access roads.

Expect temperatures to be hot during the archery hunt, and warm to moderate during the general hunt. Snow is unlikely at this time of the year, but rain and wet roads are possible. Four-wheel drive is not required in most areas, as long as roads are dry.

The Little Colorado River and Silver Creek bisects the eastern half of Unit 3A. Be very careful if you decide to attempt a crossing in a vehicle. The riverbed is sandy and may be saturated below the surface even though appearing dry.

Land Status: Land ownership in this unit is generally in a checkerboard pattern between private and state lands. There is a small block in the southwestern corner of the unit that is owned by the Apache-Sitgreaves National Forests. Maps of the forestland can be purchased at District Ranger offices located in Overgaard and Lakeside. The rest of the unit is a mix of State Trust, private, and Bureau of Land Management land. BLM land status maps are useful in determining ownership; the Holbrook and St. Johns quad maps cover the unit. A good portion of the unit is open to hunting. Hunter access is generally better west of State Highway 77 compared to the eastern half of the unit.

Along State Route 77 and 180, some land is posted and locked up, however, landowners may grant access. Do not enter posted or locked land without obtaining written permission for the period of your hunt. Camping while hunting is allowed on State Trust and BLM lands, but you’ll need to obtain permission prior to camping on private land. The unit has numerous roads, and vehicle access to hunting areas is generally good. East of State Route 77, there are many widely dispersed homes. Check the area you intend to hunt and avoid discharging a firearm within quarter mile of an occupied structure.

Main routes of access in the eastern portion are the Old Woodruff Road, Woodruff-Hay Hollow Road, and Hay Hollow Road. In the western part of 3A, two improved dirt roads, the Zeniff Road and the old Holbrook Highway, connect State Route 277 to State Route 377.

Overview: In Unit 3A, glassing with binoculars can be a very effective technique for locating elk in the open areas. Once elk are spotted, a stalk can be made. Be aware that it is not legal to locate animals, and then use a vehicle to make a pursuit; this is considered hunting from a motor vehicle. In the juniper-woodlands, successful hunting techniques include calling, still-hunting, and hunting near watering areas.

As with all hunting, pre-season scouting to locate animals prior to the hunt is important. An Apache-Sitgreaves National Forest map can be purchased at any National Forest District office (the closest ones to this area are in Lakeside and Overgaard), or at the Arizona Game and Fish Department Region I office in Pinetop. Dispersed camping is allowed on National Forest land in the southwestern corner of the unit.

Although the weather in this unit is moderate, be prepared for snow and cold temperatures on late hunts. There is also the potential for inclement weather during the earlier hunts, but precipitation here is generally lighter at higher elevations to the south.

Areas: The area around the cultivated land of the Dry Lake Farm off State Route 377 is posted and closed to hunting. Successful hunters will usually find elk somewhere between the fields and adjacent bedding areas, so getting onto the farm is not necessary. Access to this area is either by State Route 277 or 377 and two-track roads off the highways or the Zeniff road. The Zeniff road runs between the two highways and is the route used by most hunters. This road is a well-maintained dirt road, driveable under most weather conditions. Access to the 3A east area is through the Hay Hollow road that runs north from the Snowflake-Concho road, and by the Woodruff-Hay Hollow road that goes east from the south end of Woodruff.

Overview: Unit 3A has a scattered, sparse deer population. While it can produce some quality bucks, hunting this unit is not for the novice deer hunter due to low population densities. Because of the sparse population, it can be difficult to find any deer at all. There are no white-tailed deer in this unit, although the hunt permits are valid for any antlered deer. Both the archery and general (rifle) deer hunts in Unit 3A are combined with Unit 3C. Unit 3C has a much higher density of deer than Unit 3A.

The elevation ranges from 5,000 to 6,000 feet. The mule deer habitat in the unit is comprised of grassland and juniper-woodland/savannah.

Land ownership is a mix of National Forest (in the southwestern corner), State Trust, private, and Bureau of Land Management. Most of the unit is open to hunting, although there are some areas that are posted. Because of the land ownership, hunters should obtain permission from landowners before hunting on private land. BLM land status maps should be consulted before hunting the area. The unit is contained in the Holbrook and St. Johns BLM quadrant maps.

Weather is generally moderate, but may be hot on the archery hunt, and cold and wet during the general firearms hunt. Off-road travel in vehicles is not permitted on State Trust and private lands.

Because of the open terrain of Unit 3A, glassing with binoculars is the most likely way to locate deer. One should combine glassing and still-hunting in the broken or hilly terrain. Tracking may also be successful in some areas where soil conditions are favorable. Scouting before the season will help hunters determine what areas are holding deer.

Areas: Hunters should concentrate on areas located west of State Route 77. While there are deer to the east, they are few and extremely scattered and difficult to locate. The only reason to hunt the east side of the unit is if you have located a pocket of deer or an individual buck by scouting. There are numerous unimproved roads in this area and also a few improved dirt roads in the unit.

The key to locating deer is finding cover and food sources in close proximity. This is usually found in the open juniper-woodlands that contain cliffrose and other browse species. Deer are most often concentrated in areas with cover and some topographic relief. In other words, look for cover and broken, hilly, or rocky terrain.

Overview: Dove hunting in Unit 3A is fair, and if the weather cooperates, hunting can be good around some of the agricultural areas and stock tanks. The harvest is entirely mourning doves. Hunters should check current regulations for legal bag limits, season dates, and other special regulations. Often late summer storms move many birds south prior to the season opener.

There is very little grain- farming in the area, but birds generally concentrate near farms. Because most dove hunting is done relatively close to human development and other hunters, safety is very important. Check the area you intend to hunt and avoid shooting with ¼ mile of houses and buildings. Also avoid shooting at low flying birds, and be aware of where other hunters are located near you.

Areas: Agricultural areas near Woodruff, Concho, Hay Hollow, Snowflake, and Taylor can be productive. Hunting water sources such as stock tanks and rivers can also be good. The Little Colorado River drainage can provide good shooting, as doves fly along the watercourse.

Other Pertinent Climate Information
Check weather conditions during fall hunts. Be prepared for winter storms. Early snowfalls may lead to closed roads. During late hunts, animals tend to stay at lower elevations, out of deep snow.

Major Cities and Towns in or Near Game Management Unit and Nearest Gas, Food, and Lodging
Snowflake, Holbrook, Heber, Concho

Camping is allowed on Forest Service lands throughout the unit (14 day limit).

Elevations range from 5,000′ to 7,000′. Southwest corner of unit is pinyon/juniper woodland. Moving north and east, terrain transitions to high grassland with juniper.