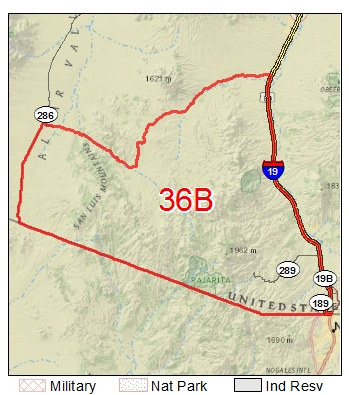 *Note: Buenos Aires Wildlife Refuge closure in 36B along the US and Mexico border is now open for hunting.

Access into the northeastern part of the unit is off of I-19 at the Chavez Siding exit. Go north 1/4 mile on the west side frontage road until you see the Hunter Access sign. The other access points to the east side of the unit include Rock Corral (take the Tumacacori Exit off of I19) and Peck Canyon.

Previous hunter access point located near milepost 13 on the Arivaca Road is no longer available due to the sale of the ranch. This portion of 36B can still be accessed by the following: Take I19 to the Chavez Siding exit. Turn north on the west frontage road. Within a 1/4 mile is a hunter access point, also known as Forest Service Road 684. Be advised that this is a four-wheel drive road. Taking in trailers is not advised.

There are 3 new access points in 36B that access the Northwest side of the Tumacacori Mountains. Two of which are through the Sopori Ranch, which Pima County has purchased and allowed certain access privileges. One is located at MP 15.5 on Arivaca Rd heading south along Saucito Wash (the Saucito wash is very sandy; 4WD and NO trailers are recommended). The other is at MP 13 on Arivaca Rd that was recently built around the KX Ranch to the east, then heads south in Sardina canyon, then up to Moyza canyon. With these new access privileges, the county has posted designated access signs and no discharge of weapons (including archery) signs near the ranch and the agriculture fields. The third access point is at Papalote well off of Universal Ranch Rd. All 3 access points have sign-in boxes and you MUST sign in and out when entering and exiting.

There is a new access point through Rancho Seco, which is located at MP 7.4, Arivaca Rd.

The Buenos Aires Refuge has provided access points (foot traffic only) into the San Luis Mts. at mileposts 7.1 and 8.1on the Arivaca-Sasabe Rd. Another way to enter is at the double gates at mp 3.5. You may drive in at this location.

SUGGESTION: Purchase a GPS unit and use OnX Maps or any mapping software that tells land ownership.

Most of Unit 36B is on the Coronado National Forest. The U.S. Forest Service offers a map that covers most of the unit. You can obtain the Nogales District map at most map stores or any AZ Forest Service office. This is the best map of the unit other than topographic maps or OnX Maps.

There are some areas within this unit where ranchers have allowed access. These areas will be posted with access signs. Please abide by all of the rules and regulations. Some of the past problems include: driving off road; littering, to include the failure to bury toilet paper and feces, and failure to clean out fire pits of unburned items; camping within a 1/4 mile of water; parking near corrals during ranch operations; shooting at signs and water tanks.

A portion of the western half of the unit is on the Buenos Aires National Wildlife Refuge. Camping is only allowed in designated camping spots and be aware of the ‘no hunt’ zones within the refuge.The Buenos Aires National Wildlife Refuge is open to javelin, deer, dove and rabbit hunting but not quail.  New hunt regulations are being proposed within the refuge.  One change is that Mt. Lion hunting will be allowed.  Changes to refuge regulations are currently open to public comment until June 8, 2020.  Contact the refuge and consult with their website prior to hunting mountain lion. Contact the refuge at 520 823-4251 or go online to https://www.fws.gov/refuge/buenos_aires/ for more information.

Consult hunting regulations for season dates and other relevant regulations.

Overview: Unit 36B supports a decent population of javelina (herd sizes are stable) but because of it’s predominant oak/grassland type it will never reach the herd concentrations found in some of our desert dominated units. Herds can be found in almost every section of the unit but are most prevalent in the mesquite/grassland areas in the northern and western parts of the unit.

The most effective way to spot javelina is by glassing east facing slopes as the first light of the day hits them. A pair of tripod-mounted binoculars is excellent for this purpose. As the day warms up, switch to areas of cover that could yield bedding sites. More information on javelina behavior can be found in the AZ Game and Fish Department publication “Javelina, Research and Management in Arizona.” The book is available at all Game and Fish offices.

Overview: Most of Unit 36B’s mule deer are found in the western part of the Unit. Small populations do exist around Amado, Arivaca, Rio Rico and the east side of the Tumacacori Mnts. Mule deer are found in the lower mesquite/grassland areas and adjacent foothills. After opening day, many of the big bucks take refuge in mesquite thickets. Look for dirt tanks that contain water, as deer should be nearby. Once the rut starts in December, big bucks should be with large groups of does, so be patient and glass the entire herd.

It is very common to see coues whitetail deer in mule deer habitat, make sure you know the difference! Make extra effort to be sure of the species you are shooting at. There has been an increase to wrong species being shot in the last couple years.

The Buenos Aires National Wildlife Refuge is open to deer hunting. Be aware of the ‘no hunt zones’ within the refuge.

Consult the hunting regulations for season dates and other relevant regulations.

Overview: Unit 36B offers excellent whitetail deer hunting opportunities. Decent densities of whitetail can be found in the Pajarito, Atascosa, Tumacacori and the San Luis Mountains. The Ruby Road offers access to many good canyons. These areas are primarily oak grassland and provide good cover for whitetail. Hunt the sunlit south facing slopes in the morning and try the oak covered north facing slopes as the day warms up. Ocotillo thickets are a good place to look for bucks. If you want to be successful, spend more time sitting and glassing than walking.

It is very common to see coues whitetail deer in mule deer habitat, make sure you know the difference! Make extra effort to be sure of the species you are shooting at. There has been an increase to wrong species being shot in the last couple years.

The Buenos Aires National Wildlife Refuge is open to deer hunting. Be aware of the ‘no hunt zones’ within the refuge.

Consult hunting regulations for season dates and other relevant regulations.

Overview:Unit 36B is good this year for hunting cottontail. One can find cottontails just about anywhere, but the Ruby Road between Pena Blanca Lake and Arivaca is a popular choice.

Consult hunting regulations for season dates and bag limits for areas other than the Refuge.

Overview: Unit 36B is a marginal dove hunting unit. Doves can be found in the vicinity of dirt stock tanks during the early hunt. Take a prescouting trip to ensure there is water in your favorite tank. On the late hunt try jump-shooting birds in open grassland hills in the Arivaca area.

The Buenos Aires National Wildlife Refuge is open to dove hunting. Try hunting the dirt tanks there as well. Be aware of the ‘no hunt zones’ within the refuge. Contact the refuge for additional information and regulations (520-823-4251).

Overview: Unit 36B is primarily a Mearns quail hunting unit. Some Gambels quail can be found in the San Luis drainage and in the mesquite/grassland habitat located in the northeastern part of the unit.

Good Mearns quail hunting is found in the oak grassland areas along the Ruby Road and in the Tumacacori Mts. Hunt the north facing slopes that have good oak cover. A particularly popular area to hunt Mearns quail is in the canyons near Pena Blanca Lake. Be advised that the area immediately around the lake is a recreational area where shooting any firearm is not allowed. Contact the U.S. Forest Service-Nogales Ranger District Office for more information.

The Buenos Aires Wildlife Refuge is closed to all quail hunting in order to protect the endangered Masked Bobwhite Quail.

Unit 36B is a corridor for the trafficking of undocumented aliens (UDAs) and drugs. Hunters will see the trails and trash left by these people. Hunters are urged to use caution when hunting and camping in 36B or any of the other border units. It is advisable to use some sort of visible anti-theft device on your vehicle. Thefts and break-ins have decreased in the last year but all hunters are advised to stay aware that these incidents can occur. Having a group of UDAs walk through a hunting area may negatively impact your hunt. The key to hunting in the border units is the ability to flex and adapt.

Coronado National Forest is open to camping, but restricted to 14 days. Possible closure to campfires during summer months. Arivaca Lake has primitive camping with an outhouse bathroom and has a restricted stay of 9 days total per calendar month.

Steep mountainous terrain with oak woodland habitat type surrounded by rolling hills with a mesquite grassland cover. Elevations range from 3,000 feet in the valleys to 6,200 feet at Atascosa Peak.