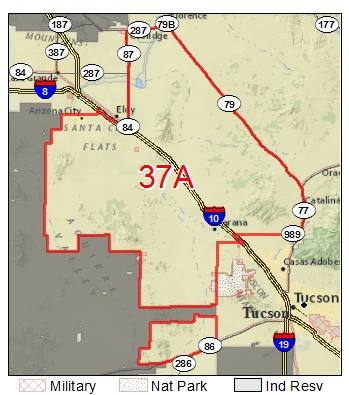 Overview: Look for javelina in the foothills of all the major mountain ranges, small hill complexes, and along the major washes. Javelina prefer the wash bottoms in flat terrain, although hunters who choose to hunt the hills may have an easier time locating them.  Javelina herds are territorial so they stay in small areas and groups have a predictable daily routine where they forage, drink, and sleep.  Javelina can be very elusive because of their small size. Look carefully in areas with javelina sign and tracks. Here are some tips for areas that traditionally have higher numbers.

Areas:
West Silver Bell Mountains: This area has received a lot of hunting pressure the past several years and javelina numbers have declined. The area is also prone to smuggling and has very poor to no cell phone reception. Access is from Sasco Road, Silver Bell Road, Avra Valley Road, and the road named “11 Mile Corner.

Roskruge Mountains: This range has good javelina populations and lower numbers of hunters compared to other areas. Be sure to check maps before hunting to avoid crossing into the Tohono O’Odham Indian Reservation which runs through the center of the mountains from east to west and makes the western boundary of Unit 37A. The area is also prone to smuggling and has very poor to no cell phone reception.

The Picacho Mountains:  This area currently has the largest herds and the greatest number of javelina herds in the unit.  Hunting will be good anywhere around the bottom of Newman Peak in the lower foothills.   There are 6 wildlife water catchments distributed around the base of Newman Peak and every catchment receives a lot of javelina use.

Access is from Deep Well Ranch Road, Houser Road, and Pecan Road. The railroad crossing is blocked about 3 miles north of the Picacho Dairy Queen along the I-10 frontage road. Access is somewhat restricted by the C.A.P. canal along the west and south side of Newman Peak. Hunters are allowed to walk through the culverts and over the bridge crossings to hunt the east and north sides of the CAP canal.

Coolidge has good populations of javelina around some of the agriculture fields. Remember to respect landowner rights and ask permission before entering private property.

The Tortolita Mountains, Owl Head Buttes, Durham Hills, and Suizo Hills have good densities of javelina throughout. The Tortolita Mountain and Owl Head Buttes receives the greatest number of hunters in the unit. The Tortolitas and Owl Head Buttes can be reached from dirt roads heading east from the I-10 frontage road (exit at Marana), from an access point at the county line on Highway 79 in Catalina or from Park Link Drive. The Durham Mountain, and Suizo Hills have lots of javelina with fewer hunters and can be reached from Park Link Drive off of Florence Highway (79), and dirt roads heading west from Highway 79.

Overview: Desert mule deer are sparse throughout the unit. It will take several years of above average rainfall to get deer numbers back to previous levels. Look for deer in large washes close to the main mountain ranges. Expect locating deer to be difficult. Preseason scouting and lots of glassing are necessary for success.

Areas: The Silverbell Mountains and Samaniego Hills are easy to access and have fair deer numbers for low desert habitat. Hunt the arroyos and flats around the Silverbells and hunt throughout the Samaniego Hills. Access points include Redrock Road from I-10 exit 226 and Avra Valley Road exit 242. Hunting is allowed in the recently established Ironwood National Monument.

The Roskruge Mountains also have a fair deer population. Consult a map before hunting in the Roskruge Mountains so that you don’t inadvertently cross into the Tohono O’Odham Indian Reservation that runs east to west through the center of the mountains and is also the western boundary of the unit.  Access to the area is from Ajo Highway near Three Points or from Mile Wide Road west of Sandario.

Deer in the Tortolita Mountains prefer the desert cover in the flats rather than the mountain itself.  Private property is scattered along the south and west sides of the Tortolitas preventing firearms discharge in those area.  Access can be gained at the Pima/Pinal county line in Catalina on Highway 79, MP 97 on Hwy 79, from the I-10 frontage (Marana Exit), and from Park Link Drive (Red Rock Exit).

The Picacho Mountains have some deer along the east and south sides. Hunt the canyons and washes around the mountains. Access may be somewhat restricted due to the C.A.P. canal, but can be gained from the east on Deep Well Ranch road, from the west by Houser road from Highway 87, and from the south on Pecan Road.  Access is blocked by railroad construction along the I-10 frontage road two miles north of the Picacho Dairy Queen.

Overview: Mountain lion densities are low within the unit. Mountain lions can be found in all the major mountain ranges, and to some extent in flatter terrain. The majority of lions are harvested by hunters pursuing other game such as deer and javelina. To increase your odds of finding a mountain lion, hunt areas that have a good density of prey. Predator calling has been successful in the past with some hunters.

Special regulations: The Department is using the most current data and management techniques available to manage mountain lion populations which has resulted in restructured open areas and season dates. Please become familiar with the changes before hunting and call (877) 438-0447 to see if the zone you wish to hunt is open. Also, note that it is unlawful to take a mountain lion that is accompanied by spotted kittens. Mandatory reporting and a mandatory physical inspection is required for successful hunters. Refer to the most current hunting regulations for specific information regarding the mandatory reporting and inspection.

Overview: Rabbits are very prolific and populations will rebound quickly with good precipitation. Rabbits can be found throughout Unit 37A, but cottontails are most abundant in the thicker cover and jackrabbits are found in the more open areas. Try along desert washes and in thickets of catclaw, hackberry or other heavy shrub areas. Hunt parallel to washes but not in them. Be especially observant around heavily vegetated areas or brush piles. In early mornings or evenings just before dark, rabbits can be observed from high points when they are coming out of cover to feed. This tactic is best used when hunting with .22 caliber rifles or pistols.

Areas: Agricultural Fields located south of Arizona City and Coolidge may provide some good hunting opportunities. Be sure to check with landowners and farmers before hunting in their fields. Access from I-10 exit 200 and proceed south on Sunland Gin Road.

West and north flats of the Tortolita Mountains. Access from the east frontage road at the Marana exit. Several dirt roads head east toward the mountains. Also dirt roads going south off Park Links Road will lead to the Tortolitas. Be sure to respect residential areas and observe all postings.

Overview: Hunting is allowed within municipal boundaries and shooting is not allowed within a ¼ mile of buildings. Get permission from landowners before hunting on private property and be sure to pick up empty shotshell hulls and litter before leaving your hunting area.

Areas:
Red Rock Feedlot: This is the most popular spot for dove hunting in the unit. Several groups of hunters will gather there so expect extremely crowded hunter densities. It is less crowded in the late season. The late season hunting time is usually best after 4 PM. Access from the Red Rock Exit on I-10 and go west about 5 miles. Do not shoot within ¼ mile of buildings.

Arizona City: Check the agricultural fields for dove movement patterns in the early morning and evening near dark. This will provide information about where doves are feeding then check for concentrations of birds in those directions. Access is from I-10 at Sunland Gin Road Exit 200. Proceed south along Sunland Gin Road.

Santa Cruz River: The Santa Cruz River is closed between Avra Valley Road and Sanders Road in the Town of Marana. In other areas, there is also no shooting within a ¼ mile of buildings and waste water treatment plants.  Decent dove hunting opportunities can be found near Red Rock, Greene Canal, and Greene Wash along the Sawtooth Mountains to the Indian Reservation. Areas near agricultural fields and water are the best bets.

Picacho Lake: Hunt the desert areas around the lake and along the Florence – Casa Grande Canal, especially near the mesquite trees at the north and east sides of the lake. Access can be obtained from Hwy. 87 south of Coolidge at Selma Highway. Turn east on Selma Highway and drive past the agriculture fields to the berm at the southwest corner of the lake.

Desert Stock Tanks: Topographic maps are your best sources for exact locations and access. Remember that these tanks are constructed for cattle use and your hunting should not keep cattle from water. Do not park close to the tanks and pick up your hulls and shell boxes.

Overview: Quail are very prolific and populations will rebound quickly with good precipitation. Listen in the early morning for assembly calls. When a covey is broken, observe their directions taken. Give them time to stop then slowly move toward them to get in range. Quail calls also help to re-assemble birds near you.

Areas: Agricultural Fields located south of Arizona City may provide some good hunting opportunities. Be sure to check with landowners and farmers before hunting in their fields. Access from I-10 exit 200 and proceed south on Sunland Gin Road.

Overview: Coyotes, bobcats, fox, badgers, and raccoons are attracted to wildlife calls.  They can be hunted by using either hand calls or electronic calls. Predator hunting is an easy type of hunting since the animals come to you. Physically challenged people may find predator calling a more enjoyable method of hunting since very little walking is required. Coyotes can be hunted year around, but other furbearers can only be hunted between August 1 and March 31. There is no hunting allowed at night except for raccoons and no shooting from vehicles.

Areas:
Santa Cruz River and Irrigated Farmlands: Raccoons will be found near the water. Sounds to use are raccoon twittering, raccoons fighting, and raccoon pup distress.

Newman Peak, Durham Mountain, Suizo Hills, Ironwood National Forest, Tortolita Mountains: The rocky wash bottoms and dense cover areas in these places are good for fox and bobcats. Sounds to use are grey fox distress, rabbit distress, birds distress, and kitten sounds. Where there are rocks, there’s fox so expect boulder strewn areas to be best for calling in fox.

CAP Canal: Mountain Lions lounge in the overshoot tubes along the CAP canal to ambush wildlife crossing the canal. Sounds to try are javelina piglet, deer fawn, rabbit distress. The green up side of the CAP canal is good for coyotes, bobcats, badgers, and fox.

Other Pertinent Climate Information
This is a very hot, dry unit. Travelers are advised to carry extra water and to tell someone their travel plans in case they fail to return.

Major Cities and Towns in or Near Game Management Unit and Nearest Gas, Food, and Lodging
Coolidge, Florence, Tucson, Marana

Major Highways and Roads Leading To
From the East: Hwy 79
From the West: I-10
From the North: State Route 87
From the South: Hwy 77

Picacho peak campground managed by the AZ State Parks. Exit from I-10 at Picacho peak.

The unit is comprised of both BLM and State land. Contact the Bureau of Land Management or the State Land Dept for information on camping on public lands.