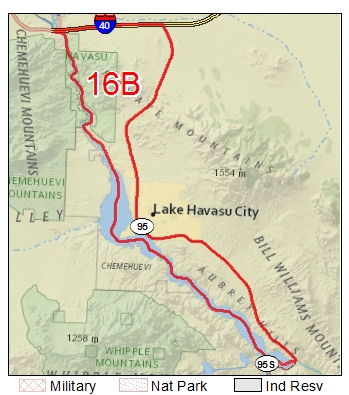 Overview: The sheep permit(s) for 16B encompass both the north and south portions of the unit. The Needle Mountains are located in the north portion and the Aubrey Hills in the south.

Both mountain ranges are relatively small and can be covered very thoroughly during the hunt. The class III and IV rams observed in this area normally score between 140 to 170 Boone and Crockett points. These rams tend to score lower, for their age, because of the low rainfall and harsh living conditions.

Areas: The north portion (Needles Mountains) has vehicle access to the base of the Needle’s on both the north and south ends. To access the north end you can take Interstate 40 to the Needles Mountains Exit (exit 2). This exit is located about three miles from the Arizona/California border. To access the southern part, there are two-track designated dirt roads that head west from State Route 95 at milepost 192 into Blankenship Wash and also across from the intersection with Lone Tree Road near the power substation (milepost #194). All of these access routes eventually end at the Havasu National Wildlife Refuge boundary. Motor vehicles are not allowed on the refuge, even on existing roads. Motorized access is on designated routes only on BLM lands. Contact the Havasu BLM office for maps of the designated routes. Another alternative is to access the area by boat. There are boat launches in Lake Havasu City and Topock. Both launch areas are only within minutes of the Needle Mountains. This would be a good way to hunt the area around Devil’s Elbow and Picture Rock. Sheep are frequently seen in both of these locations by boaters. Navigating the river at night is difficult and should be avoided if a boat is used to access hunting areas.

The south portion (Aubrey Hills) is also very small. This area is not as rugged as the Needles however vehicle access is not permitted west of State Route 95. Boat access is allowed, and would be the easiest way to access the heart of the sheep country. The area along the lake shoreline most frequented by sheep is from Pilot Rock to Steamboat Cove.

Overview: Population surveys for dove are not conducted in this unit. Dove in this unit are drawn to the habitat created by development in Lake Havasu City. The majority of these birds are found along the lake’s shoreline adjacent to the city. This area has plenty of food, water, and cover for dove. Dove numbers drop as you move further into the desert and away from the city and the river.

The harvest over the last few years has been variable, influenced by both the numbers of hunters and dove. Generally the first couple days of the season result in a quick bag limit but numbers taper off for the second weekend due to hunting pressure. The majority of the birds harvested in this unit are mourning doves although a few white wings are taken each year.

Areas: A popular hunting location is located west and north of London Bridge Road and Chenoweth Road. This area is North of the Lake Havasu City limits and between London Bridge Road and the river. The area is made up of sand dunes, salt cedars, and thick mesquite groves. This location is subject to NO SHOOTING within a 1/4 mile of a building. The Refuge golf course and residential area (not the Havasu National Wildlife Refuge) is unlawful to hunt in.

The land ownership is private, State Land, and National Wildlife Refuge. The posted portions of private land are not lawful to hunt unless the owner grants permission. State Land in this area is open to hunting. The Havasu Wildlife Refuge has portions both open and closed to hunting. The portion of Refuge that lies within the Lake Havasu City limits is closed to hunting. The area that lies north of the city limits to Castle Rock Bay is open to hunting. The portion of Refuge that extends from Castle Rock Bay to Interstate 40 is closed to all hunting within 1/4 mile of the Colorado River. Hunting done on the Havasu Refuge must be in compliance with Refuge Rules and Regulation. Please note that you may only be in possession of NON-TOXIC SHOT while hunting on the Refuge. For additional Refuge information call (760) 326-3853, or refer to their website.

Be sure to pick up a copy of the current Dove Regulations to check bag and possession limits and season dates before going in the field.

Overview: Population surveys for quail are not conducted in this unit. Quail will be located near a permanent water source and along wash bottoms lined with trees. These areas provide the best forage and hiding cover for wildlife. Quail numbers are relatively low compared to other areas of the state due to the extreme climate.

Areas: The best location to start hunting is south of Lake Havasu City across from the Standard Wash OHV area. This area is closed to motorized vehicles. This area contains a high density of washes with increased vegetation near the wash.

Areas: Colorado River from Castle Rock south to the north basin of Lake Havasu provides the best waterfowl hunting. The backwaters with isolated areas of open water surrounded by cattails and other aquatic vegetation hold high numbers of migrating and resident waterfowl. Castle Rock Bay typically receives the highest hunting activity along the river. On the lake, the backs of coves with cover sufficient enough also hold resting waterfowl.

Other Pertinent Climate Information
This is a very hot, dry unit. Average annual precipitation is only 2.67″. Travelers are advised to carry a lot of water and to tell someone their travel plans in case they fail to return. Boaters sometimes encounter rough, windy conditions on Lake Havasu.

Contact the Bureau of Land Management for information on dispersed camping on public lands throughout the unit.