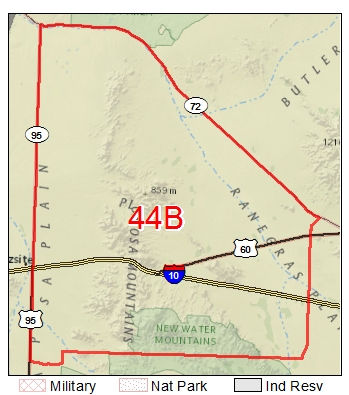 A portion of the unit north of I-10 and east of highway 95 has been annexed by the Town of Quartzsite but is still open to hunting as part of an agreement between the Town and the Arizona Game and Fish Department.

Overview: Unit 44B is divided into two units (north and south) for the Bighorn Sheep hunt. Population surveys are generally conducted every three years.

In Unit 44B north, recent surveys suggest this population is at its highest levels since the mid 1980’s including a large number of adult rams.  Most of the sheep in this unit can be found between I-10 and the Plomosa Road, with a lot of herds concentrated in the greener areas following summer rains. The rams taken from this unit have average scores above 170. Access for glassing is good off I-10 at Gold Nugget road and from Hwy 60 in Brenda. A network of off-road trails also provide access into the heart of the Plomosa Mountain Range.

The Bighorn sheep population in unit 44B south has also shown an increasing population trend.  Harvested rams have been scoring in the mid to low 160’s. A large portion of the sheep habitat in this subunit is within the New Water Mountain Wilderness which limits the use of motorized vehicles. The sheep hunt in this unit also includes those portions of 45 A & B (Kofa NWR) north of the El Paso Gas Line.  Access to this unit is available off Vicksburg Road, I-10 at New Water Mtn road, Ramsey Mine Road in Brenda at Hwy 60, and Gold Nugget (exit #26), as well as Hwy 95 thru the Bureau of Land Management (BLM) Long Term Visitor Areas (LTVAs), south of Quartzsite.

Overview: The deer population in 44B continues to fluctuate with seasonal rainfall. If summer storm patterns are widespread across the unit, hunters can expect the deer to also be widely dispersed.

Unit 44B is mostly public land managed by the Bureau of Land Management. Off-highway travel is limited to existing roads, trails, and washes but there is a vast network of OHV trails providing access throughout this unit.  The one exception to this is the New Water Mountain Wilderness, south of I-10, which is closed to all motorized vehicles but is opening to hiking. Much of the area between Bouse, Brenda, and Vicksburg is a mixture of Arizona state trust land, BLM, and private property. Access should not generally be an issue but be sure to check land status before hunting in this area of the eastern portion of 44B.

Areas: In this low desert habitat, desert mule deer typically use the vegetated drainages that flow out of the mountains and into larger wash systems for cover and movement.  Several OHV trails encircle the Plomosa mountain range, crossing many of these washes.  At the northwest corner of GMU 44B in the Plomosa’s is a complex of sand dunes that many hunters overlook but which can hold a number of deer.  The small rolling hills between Brenda and the New Water Wilderness also provide plenty of habitat and cover for deer, but numbers are influenced by summer rains.

In 44B north most access is from the Plomosa Road between Bouse and Quartzsite or off Hwy 60 near Brenda.  The old La Posa Road off Hwy 72 at mp 18 will provide access to the most northern part of this unit.

Interstate 10 bisects GMU 44B and offers access to most of the southern half of the unit.  Access points include, Exit #26 Gold Nugget Road (exit #26), Ramsey Mine Road (from hwy 60 just west of Brenda), and New Water Mountain Road (I-10 mp 40 at the corrals).  Access points on the west side from Hwy 95 are through the BLM’s Long Term Visitor Areas and on the east side off Vicksburg-Kofa Road.

Overview: White-Wing Dove, Mourning Dove, and Eurasian Collared Dove can be found in this unit. White-wing typically concentrate near agricultural areas that have crops such as melon and wheat. Mourning Dove are usually more widely dispersed across the unit.  Eurasian Dove are found in close association with Human activity.

In 44B successful dove hunters will find a flight corridor along a habitat edge, large desert wash, or a local water source to hunt near.  While flight patterns may change year to year some areas offer consistent shooting.  These include along major drainages such as Bouse Wash, near water tanks along County 42E, and the edges between agricultural fields and open desert.  In some areas, dove do not begin flying in great numbers until later in the morning.  Scouting before the season opener can pay off.  Hunters are also reminded to clean up after themselves, including spent shotgun shells and boxes when done hunting.

There are some great junior hunting opportunities in the late afternoon especially around water. Look at stock tanks, or sloughs around agriculture for large concentrations of birds late in the day.

Overview: The unit has one species of quail, the Gambel’s quail. Local populations are dependent on winter rains. Quail are generally found in the canyons and drainages of the New Water and Plomosa Mountain Ranges.  The majority of the unit is managed by the BLM with most of the unit accessible from existing roads, trails, and washes. The only exception is the New Water Mountain Wilderness that is closed to all motorized vehicles but open to hiking.

Areas: The northern part of the unit has the least numbers of permanent water sources. Jeep trails parallel either side of the Plomosa’s and cross numerous washes. Walking these washes may be productive. On the East Side of the Plomosa’s some of the washes have natural potholes that may hold water from late summer rains. Bouse wash is the largest drainage in this part of the unit and flows from Hwy 60 near Brenda, through Bouse, and around the northern end of the Plomosa’s towards the Colorado River. Large, dense mesquite and palo verde trees in this wash can provide good cover for coveys.

South of the Plomosa road, a number of large washes flow from the inner areas of the mountains. Stop and listen where roads cross for calling quail. County road 42E, between Bouse and Brenda, has a number of livestock tanks and some thick patches of mesquite. Just keep in mind that there are a number of homes also scattered along this road. Don’t shoot within a 1/4-mile of these structures and be sure to ask permission before hunting on private land.

The area south of Interstate 10 is almost completely BLM land. A number of jeep trails provide access to most of the unit. New Water Mountain Road, Ramsey Mine Road, and Gold Nugget Wash are the three main access routes. Just outside of Quartzite, a couple of roads pass through the Long Term Visitor Areas and head east up into the Plomosa’s. Be aware that this area will increase in off-highway traffic as it gets closer to December and January and more recreationist start visiting the area.

Some privately owned facilities in Bouse, Brenda and Quartzite.

Unit 44B is located on the transition zone between the Mohave and Sonoran deserts. Numerous off-highway vehicle trails make for easy access to most parts of the unit. Elevations range from 850′ in the flats to over 3,600′ at Black Mesa. Palo Verde mesquite, cat-claw acacia and ironwood are primarily confined to the washes in the lower elevations, but are more evenly dispersed in the uplands of the New Water Mountains.