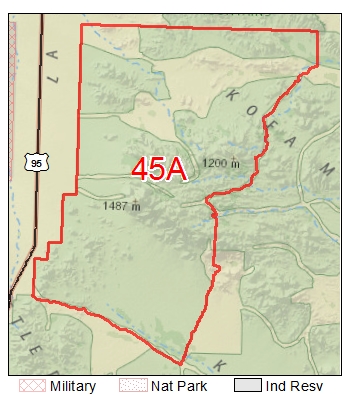 Overview: The results of the most recent sheep surveys show this population has rebounded from a significant decrease, and has steadily increased since 2010. The estimated total number of rams in the population has been increasing, but the estimated number of class IV rams remains very low.

As with any bighorn sheep hunt, pre-hunt scouting is very important to a successful hunt in this unit. Good areas to scout are the Livingston Hills, which can be accessed from the MST&T road off of milepost 92.7 on Highway 95. This road will take you all the way to the MST&T tower, and there are roads to the south that will lead you into Burro Canyon. This is an area where hunters have had success in the past. Hunters can also access good hunting areas by taking Palm Canyon road off of 95 and then driving into Kofa Queen Canyon. All of these roads can get pretty rough, and four wheel drive is needed.

Overview: For the deer hunt, 45A is part of a combined hunt unit that includes units 45A, B, & C. Unit 45, or the Kofa National Wildlife Refuge, has a reputation for quality mule deer hunting, but work and scouting is required as the terrain is rugged and vehicle access is limited in wilderness areas. The deer population in this unit fluctuates regularly, and is dependent on habitat conditions as they relate to drought.

Persons hunting the refuge have a variety of habitats in which to hunt deer. Much of the deer habitat on the refuge consists of flat to rolling low desert. Deer hunting in this type of country, even in the best years, can be difficult. Most people hunting the flats try to find high points from which to glass. Hunter densities are much lower in the flat country than the mountainous areas of the refuge.

Historically, the high rolling country found in the interior of the Kofa Mountains had the highest deer densities on the refuge. Hunter concentrations tend to be much higher in these areas than the more flat terrain. One of the side benefits of hunting the high country is the opportunity to observe some of the many bighorn that inhabit the refuge.

Areas: Kofa Mountains: Take the El Paso Natural Gas Line Road eight miles south of Quartzsite on Highway 95 east into the refuge. From this road several roads will give you access to the interior of the Kofa Mountains. Additionally the MST&T Road at milepost 92.7 will also provide good access through the Livingston Hills and south into Burro Canyon. The Palm Canyon and the King Valley Road, also off Highway 95 will get you to good hunting areas. The Hovatter Road off of Interstate 10 west of Tonopah and the Engesser Road taken from the Whitewing Ranch area north of Dateland will get you to some of good areas on the east side of the refuge.

King Valley: This vast valley separates the Kofa Mountains to the north from the Castle Dome Mountains on the south end of the refuge. Large desert riparian areas here provide great mule deer habitat. The best way to hunt this area is to find hills and glass the flats from these high points. Some very large and very smart deer inhabit this area. Take the King Valley road east of Stone Cabin on Highway 95. This road will provide you with the best access to this area.

Overview: Unit 45A’s quail population fluctuates greatly in response to the amount of rainfall received. Fortunately this unit has recently received moderate rainfall in late winter and early spring, and quail hunting should be good. The quail population is evenly dispersed throughout the unit, with many decent sized coveys.

Besides the Cibola NWR, there is a good amount of quail dispersed along the river corridor between Cibola and Ehrenberg. Hunters should have some success with fair to good opportunity along the Oxbow Road, and in the surrounding desert areas.

*Note: Most of the Kofa National Wildlife Refuge is wilderness areas and special regulations apply. Vehicle use is limited to existing designated roads and must remain within 100 feet of these roads. All firearms, including handguns, rifles and shotguns, within a vehicle must be unloaded and either cased or broken down. For complete refuge regulations contact: