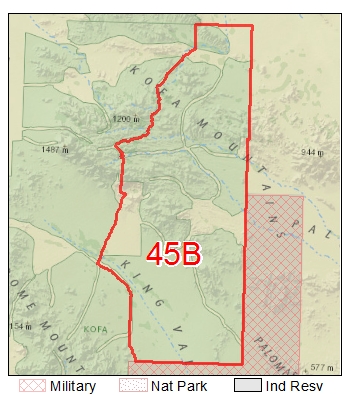 Overview: The east half of the Kofa Mountains and a small part of the Tank Mountains make up the bighorn areas of Unit 45B. Most of the bighorn are found in the Kofa Mountains portion of the unit. Very few bighorn sheep are found south of Engesser Pass in the Tank Mountains, however, large rams have been observed in this area. The bighorn sheep population in Unit 45B has dropped about 25 percent during the drought years of the early to mid-1990s. During this time permits varied between 2 to 4 permits per year. Unit 45B has experienced fluctuating hunter success during this time. A wide variation in both age and score of rams has also occurred. From 2005-2010 hunters experienced 100% hunt success. The ten year average for harvested rams in 45B is 155.

All of Unit 45B lies within the boundaries of the Kofa National Wildlife Refuge. Much of the unit also is composed of wilderness area and special regulations apply. Vehicle use is limited to existing designated roads and must remain within 100 feet of these roads. For complete refuge regulations contact:

Areas: High Tank 3 (White Dykes Dam): This area is found immediately north west of Craven Well in the north east portion of the unit. A good number of bighorn sheep are found on the high mesas around High Tank 3. Look around the rims and on top of the mesas for sheep. Take the Hovatter road south from Interstate 10 to the El Paso natural gas line, then east onto the Kofa National Wildlife Refuge to intersection 14, then south to Craven Well.

Hoodoo Well to Moonshine-Yaqui Tanks: South west of Hoodoo Well is a large block of mountains that run south to Moonshine wash, then west to Yaqui Tanks area. Bighorn sheep can be found throughout this area. Just west of Yaqui Tanks is Kofa Butte. An occasional ram can be found south of the butte along the high country above Charlie Died tank to the Manganese Mine area located just south of the entrance to Moonshine Wash. Access: Take the Hovatter road south from Interstate 10 to the El Paso natural gas line, then east onto the Kofa National Wildlife Refuge to intersection 14, then south pass Craven Well through Red Rock Pass to Hoodoo Well. You can also get to Hoodoo Well by taking the Hovatter road directly to the Hovatter Camp, Then west to Hoodoo Well.

Polaris Mountain Area: Bighorn can be found all around this large mountain found along the units west boundary. If you hunt here be familiar with the boundary so as not to stray into Unit 45A.

NEW WATER MOUNTAINS: A very small portion of the New Water Mts. (the very east end of the mountains) lie within Unit 45B. Depending on the year, a good number of sheep, along with an occasional good ram, can be found here. Access: Take the Hovatter road south from Interstate 10 to the El Paso natural gas line, then east onto the Kofa National Wildlife Refuge, then look north of the gas line and west of the road to Kofa Cabin.

General: Rams can be found throughout much of the low rolling hills that make up much of the unit like bighorn pass and the Hoodoo Wash area.

Overview: Unit 45B quail populations continue to respond to fluctuations in the amount of rainfall received. With the significant moisture received this past winter, the 2010 hunting season should be good.