In this feature story, expanded from the May–June 2010 issue of Arizona Wildlife Views magazine, five professional photographers share the tools and techniques behind a favorite wildlife photo.

When the Time is Right 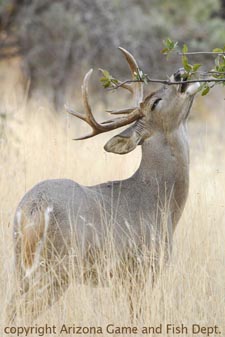 In the Shot: I think the best time to photograph ungulates (such as deer) and horned animals (such as antelope) is during their breeding period. For Coues white-tailed deer, the rut occurs between mid-December and March, peaking in January. Bucks lose their caution and move around more, making them easier to see. There is an old saying that goes something like this: “Find the does and get the buck.” I was fortunate to catch this buck staying very close to a doe that was almost ready to breed; he was not going to miss his opportunity.

Shot Specs: Nikon D200 on manual focus, with a Nikkor 300 mm VR AF-S 1:28G ED lens also on manual focus. I set the camera at ISO 800 to get a very fast shutter speed for hand-holding the vibration-reduction lens. I chose flexible program mode with an aperture of f/5.6 for a shallow depth of field to emphasize the subject and to blur the background. I set the white balance to “cloudy weather” to bring some warmth to the image because the shooting was in mixed lighting.

Challenges: The main challenge was locating deer and finding bucks. Once I did, the next challenge was to stalk a buck for a photo opportunity. White-tailed deer generally are fidgety and highly nervous, but are less so in breeding season. The final challenge was hand-holding a 300 mm lens and manually focusing it so that it would not re-focus on the tall grasses or tree branches.

Parting Thoughts: Studying the habits and habitats of an animal you wish to photograph, and knowing as much as you can about them, will increase your chances to make some great images.

George Andrejko has been a professional photographer for more than 25 years. In 2009, he celebrated his 20th year with the Arizona Game and Fish Department, a career that has taken him to many remote corners of the state to photograph wildlife. One of his favorite places is southeastern Arizona, where this photo was taken. 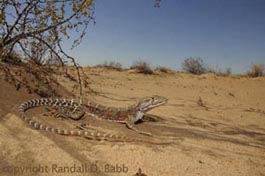 In the Shot: This photo is of a female leopard lizard in her postnuptial blush, coloration that develops after breeding and fades soon after egg-laying. A trip specifically to photograph these lizards during the brief period they are in color was made in May to the southwestern part of the state. Leopard lizards are ambush predators, so I wanted the photo to look like the lizard was lounging in the shade, waiting for prey to wander by.

Challenges: It took several hours to find and capture a well-colored leopard lizard. Lizards don’t typically allow close approach, but to get the photo I wanted, I needed to be a few inches away from the subject with the lens focused at 18 mm. I chilled the lizard down in an ice chest first so I could manipulate it. Once I set it in place, I had to lie on my stomach on very hot sand for several minutes until the lizard warmed up, got its color back and looked natural. Using the rear-curtain sync setting ensured the background was properly exposed before the flash went off. The flash was dialed down -3.0 EV so it would not overpower the shadows but rather open them up and provide a little catch light in the subject’s eye.

Parting Thoughts: I had wanted to take this picture for a long time, but knew it was going to take a long trip and a lot of effort to get it. Having a good idea of what problems will be encountered and how to overcome them will help make the most of an opportunity.

Randy Babb started his career in biology in the early 1980s, taking up photography at about the same time. He enjoys photographing all wildlife, but reptiles and amphibians always have been of particular interest.

Jewel of the Bird World 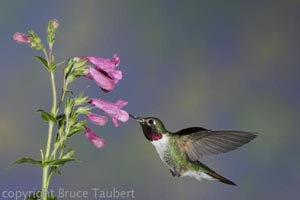 In the Shot: I took this photograph of a male broad-tailed hummingbird in upper Oak Creek Canyon. My goal was a close-up, stop-action photograph of this little jewel of the bird world to show one of its unique anatomical features: the small separation or slit at the tip of the wing. When the male’s wings are moving at 60 beats per second, this feature causes a vibration that results in a high-pitched ringing sound unique to this species of hummingbird. It took several visits to Oak Creek and hundreds of photographs to get the image I wanted.

Challenges: Using high-speed flashes, I am able to stop the hummingbird’s wing movement and show this little gem in a way that is otherwise impossible. The process is relatively simple. Set a hummingbird feeder out for a few days. After the hummingbirds are coming to the feeder, place a flower near it. With your camera on a tripod, pre-focus on the flower. Set up the flashes to light the bird when it returns to the flower. In a few minutes the hummers will sample the sweet nectar of the flower and you take the photograph. Due to the physics of high-speed flash photography, the entire scene is set up in an outdoor photography studio. The bird, flower, and background are all lit by the flashes without using any ambient light.

Parting Thoughts: As a self-professed camera geek, I get excited about using my equipment to capture unique and difficult images. By using high-speed flashes, I have been able to take photographs of flying birds, bats and insects that amaze me and illustrate animal behaviors seldom seen.

Bruce Taubert has been photographing wildlife for more than 40 years. He now spends all his spare time teaching photography, leading workshops for Friends of Arizona Highways and, of course, taking as many photographs as he can.

In the Shot: The spinal deformity known as “lordosis” didn’t seem to drastically affect this chub's ability to swim in the swift down-current of a large pool just below the decommissioned Irving power generation station on Fossil Creek.

Shot Specs: Nikon D300, 10.5 mm fisheye lens, housed in a Sea & Sea underwater housing with strobes. To properly expose the bright, churning water but capture the darkness of the underwater scene, I used a small splash of strobe fill light and a high shutter speed of 1/320 second at f/9, ISO 200.

Challenges: In full wetsuit, mask, snorkel and fins, I swam upstream against water cascading over a travertine dam at the headwaters of a pool in Fossil Creek. But the closer I got to the falls, the more the current pushed me downstream and kept me from getting close enough to the chub to take a photo. Spotting a large boulder upstream in about 6 feet of water, I took a deep breath and kicked hard to reach it. I wedged my legs and one arm around the boulder and hung on to the camera with the other, gazing up at the sun piercing through the well-oxygenated water. Out of breath, I had to surface and was quickly swept downstream about 100 feet. After repeating this strenuous upstream swim numerous times, I was finally able to frame this kinky little chub and properly expose the shot.

Parting Thoughts: The technical and physical difficulty of this shot aside, the beautiful colors, contrast, patterns and texture of this light-drenched turquoise-blue scene make it one of my favorite images. Even more special was the chance to capture an image of this native fish, which has defied the odds of natural selection and is living freely in the restored waters of Fossil Creek.

Ron Watkins is an international award-winning photographer and photojournalist who specializes in underwater photography of marine life, reefscapes and models.