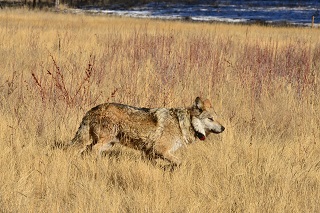 Photo of Mexican wolf in the U.S., taken several years ago.

PHOENIX — Mexico’s National Commission of Natural Protected Areas (CONANP) recently released two pairs of endangered Mexican wolves in two areas in the state of Chihuahua, where they are expected to adapt and survive in their native environment.

These events are a result of the efforts of the Mexican Wolf Action Program for the Conservation of Species led by CONANP, in collaboration with the Autonomous University of Querétaro, which, since 2012, has been permanently monitoring the wild population of Mexican gray wolves in the Sierra Madre Occidental. CONANP is the agency responsible for administration of 182 Protected Natural Areas in Mexico and promotes wildlife conservation and best practices among users within those areas.

CONANP’s efforts to recover this species are part of a collaboration of more than 40 years between Mexico and the U.S, with the participation of the U.S. Fish and Wildlife Service (USFWS), the Arizona Game and Fish Department (AZGFD), and the New Mexico Department of Game and Fish (NMDGF). All of them, with CONANP, are in the final negotiation of a Letter of Intent that will be signed soon to strengthen this program.

The program also includes the implementation of actions aimed at improving coexistence with the species and attention to depredation events and livestock conflict where these reintroductions take place. These actions represent the fulfillment of one of the main commitments established by the “Action Program for the Conservation of the Species: Mexican Wolf” (PACE) of CONANP and the “Mexico-United States Program for the Recovery of the Mexican Gray Wolf.” This is in addition to other training and environmental education actions with local communities that include workshops and the preparation of environmental education materials, as well as informative sessions on the insurance against predator attacks.

As of November 2019, the Mexican gray wolf moved from the category “probably extinct in the wild” in the Official Mexican Standard NOM-059-SEMARNAT-2010 to the category “in danger of extinction,” and it remains in the Appendix II of the Convention on International Trade in Endangered Species of Wild Fauna and Flora (CITES).

“AZGFD’s contention has always been that Mexico is an important component of Mexican wolf recovery,” said Jim deVos, Mexican wolf coordinator for the Arizona Game and Fish Department. “These efforts show that through international cooperation, recovery efforts are moving forward in Mexico and contradict the contention of some critics that recovery can’t occur in that country.”

The Mexican wolf is the most genetically distinct subspecies of the gray wolf, and the world’s most endangered population of wolves. Their average weight is only 73 pounds for males and 59 pounds for females, reaching just 31.5 inches at the withers.

This subspecies of gray wolf was at one time distributed from the southwestern U.S. into the Sierras Madre Occidental and Oriental reaching Central Mexico, with some authors believing its range was as far as Oaxaca. Its extinction was due to intensive eradication campaigns by government agencies, both in the U.S. and Mexico, mainly due to misunderstanding of the importance of its presence in healthy ecosystems.

“With these releases, CONANP reiterates its commitment to continue efforts to establish this subspecies that bears the name of our country,” said the agency in a news release statement. “Therefore, these releases represent an important advance in the recovery efforts of the Mexican gray wolf.”