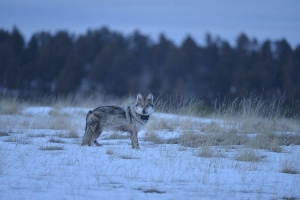 “The count shows we have more wolves, more breeding pairs and more pups born in the wild than ever before,” said Amy Lueders, Regional Director for the U.S. Fish and Wildlife Service in Albuquerque, NM. “This is the second year we have seen a significant increase in the wild population of Mexican wolves, a success that is directly tied to the science-based, on-the-ground management efforts of the Interagency Field Team.”

“The numbers highlight the wolf’s progress in the wild,” said Jim deVos, Assistant Director of Wildlife Management for the Arizona Game and Fish Department. “The results of this census are very important as they reflect the great progress being made in the recovery of the Mexican wolf in the United States. The increase in the Mexican wolf population is not an isolated year, but rather a continuum of increases over the last 10 years.”

Working with the Mexican government, the Service in 1977 began developing a captive breeding program to restore the wolf’s numbers. It started with seven wolves, aiming for the day the program could release wolves into the wild. That day came in 1998, when the Service, in cooperation with the Arizona Game and Fish Department, released 11 wolves within a range called the Mexican Wolf Experimental Population Area in Arizona and New Mexico. In 2011, the program expanded to Mexico with the release of wolves in the Sierra Madre Occidental. Mexico currently estimates there are approximately 30 Mexican wolves in the Sierra Madre Occidental.

In November 2017, the Service completed a revised Mexican Wolf Recovery Plan, after working with state agencies and other partners. The recovery plan uses the best available science to chart a path forward for the Mexican wolf that can be accommodated within the subspecies’ historical range in the southwestern United States and Mexico. This revised plan provides measurable and objective criteria for successful recovery. When those goals are met, the Service will be able to remove the Mexican wolf from the list of endangered species and turn management over to the states.