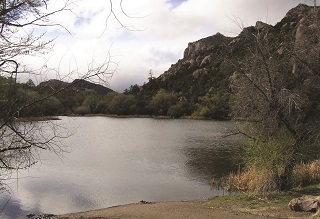 PRESCOTT, Ariz. — Three lakes in the Prescott National Forest — Mingus, Granite Basin and Horsethief Basin — have recently experienced fish die-offs. The Arizona Game and Fish Department (AZGFD) advises anglers and other members of the public not to collect or consume fish they find that appear to be dead or dying.

The three lakes are small bodies of water that are susceptible to low dissolved oxygen levels due to increased vegetation growth during the warm summer months. During the day, aquatic plants increase oxygen levels within the lakes during photosynthesis, but during the night plants consume oxygen, lowering its availability to the fish. These low dissolved oxygen conditions can stress aquatic organisms and, if low enough, cause mortality. Run-off from recent rains has made matters worse by introducing new sediments and stirring up existing sediments on the bottom of the lakes which also depletes oxygen.

AZGFD believes that this situation is naturally occurring and will subside as temperatures decrease and the aquatic vegetation becomes dormant.

The U.S. Forest Service issued an advisory to the public on Sept. 25 against swimming or wading in these lakes at this time. AZGFD and the Forest Service are continuing to monitor and investigate the situation.