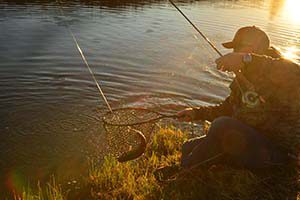 Deep in the West, under a secret rock in a cool stream, lies a prize worth finding. Anglers of all skill levels are invited to participate in the Western Native Trout Challenge and put the lure of the West on their bucket list. In addition to earning bragging rights and prizes at the Expert, Advanced and Master Levels, participants will help the Western Native Trout Initiative (WNTI) conserve 21 species of native trout.

The 12 states where these native trout can be found are Alaska, Arizona, California, Colorado, Idaho, Montana, Nevada, New Mexico, Oregon, Utah, Washington and Wyoming. The state fish and wildlife agencies in each of the 12 states are partnering on the effort, along with the U.S. Forest Service, the federal Bureau of Land Management and Trout Unlimited.

“The Western Native Trout Challenge highlights the opportunity to fish for numerous native trout throughout the West including Apache trout in Arizona, a species listed as threatened under the Endangered Species Act,” said Chris Cantrell, Aquatic Wildlife Branch Chief for Arizona Game and Fish Department. “Thanks to conservation efforts led by Arizona Game and Fish Department, select waters are now open, and we look forward to welcoming anglers to our state.”

Native trout are the embodiment of the West. The wild rivers, alpine lakes, and trickling arroyos — the fiber of Western geography — are the habitat for the redband, the cutthroat, and the Gila.

Anglers can get details on which fish to catch and where to find them by registering on the website, WesternNativeTroutChallenge.org.  Registration is $25 per adult and is free for those 17 and under. The vast majority (92%) of the fee will go toward helping conserve native trout populations for future generations to also enjoy.

“We’re thrilled to be launching this fun way to support native trout conservation across the West,” said WNTI Coordinator Therese Thompson. “For every $25 program registration fee, $23 will go directly back to conservation projects that are helping native trout populations thrive. We want anglers to learn about these unique species and where they can go to catch them. In addition, catching the selected species helps conserve them by promoting angling and fishing license sales for native trout species, which also supports conservation efforts. It’s a wonderful way to help conserve these beautiful species, in beautiful places, at your own pace.”

Learn more, and register at WesternNativeTroutChallenge.org.