Quail outlook: A tough season ahead 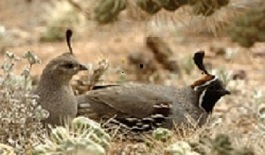 Lack of winter moisture to blame for low bird numbers

PHOENIX — Those record-setting rains that soaked most of the state, including the Valley, over the first two weeks of October?

If you’re an Arizona bird hunter, keep your fingers crossed there’s even more on the way over the next few months to help give quail populations a desperately needed boost in 2019-2020.

As for the 2018-2019 season, which begins Friday, “well below average” might be the best way to describe statewide quail-hunting prospects. On second thought, it might be too kind.

So, where are the quail?

“Overall, desert quail numbers seem to be much lower than we typically see,” Zarlingo said. “Gambel’s quail are very widespread south of the Mogollon Rim, and there will be pockets where it will be possible to harvest a fair number of birds.

“Keep in mind that Gambel’s and scaled quail populations have been very depressed for a number of years, and it will take consecutive years of timely winter precipitation to bring back those populations to where they were in the late 1980s.”

When it comes to scaled quail, found mainly in Cochise and southern Graham counties, Zarlingo said populations have been hit hard by drought and habitat degradation from tree and shrub invasion into grassland areas. Local wildlife managers report poor call counts for scaled quail, so prospects for this season do not look good.

Meanwhile, hunters should note that the season for Mearns’ quail doesn’t begin until Dec. 7. Zarlingo said Cochise and southern Pima counties are the traditional strongholds for these birds, which favor oak-grassland or pine-grassland savannas. The outlook for this season is much better, as brood survival is predicated on timely monsoon rains.

“The summer monsoon moisture was good statewide, with rain falling throughout the summer,” Zarlingo said. “Without surveys associated with Mearns’ quail, we’re expecting a good year for brood production.”

More quail-hunting information can be found on the department’s website. Another resource for both new and experienced hunters alike is “An Introduction to Hunting Arizona’s Small Game.” Written by Randall D. Babb, the 196-page, full-color book covers where and how to hunt small game birds (like quail), squirrels, rabbits, ducks and geese. It also includes how to prepare and cook your harvest, with illustrations and recipes.

The book can be ordered for $16.95 at www.azgfd.gov/publications.

As a reminder, AZGFD still is accepting registration for hunters to participate in the Arizona Small Game Challenge, a new concept created in partnership with the Valley of the Sun Chapter of Quail Forever that highlights the state’s abundance of small game hunting opportunities.

Every $25 registration will be matched, dollar for dollar, by the Valley of the Sun Chapter of Quail Forever to benefit small game species through habitat improvements such as grassland restoration, planting crops for wildlife and water source development.

The Arizona Small Game Challenge is comprised of four individual challenges — including a  Native Quail Challenge:

A hunter who completes his or her first challenge will receive a plaque that includes an engraving plate to mark the achievement. The plaque comes with space for additional engraving plates as a hunter completes one of the remaining challenges each hunting season.

The first step is to register at /hunting/species/smallgame/challenge-info/. The registration fee is $25 per challenge (a hunter is eligible for only one challenge per year). Then go hunting in accordance with all legal requirements, including season dates.

Be sure to take a time-stamped photograph of each species harvested for a particular challenge, then visit the website and fill out the verification form to certify the completion of that challenge. All photographs and the completed verification form should be emailed to: wzarlingo@azgfd.gov, or mailed to: Arizona Game and Fish Department, Small Game Program Manager, 5000 W. Carefree Highway, Phoenix, AZ, 85086. Photographs will not be returned.