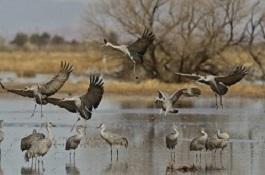 PHOENIX — Sandhill cranes by the thousands have once again returned to their wintering grounds at the Whitewater Draw Wildlife Area in southeastern Arizona.