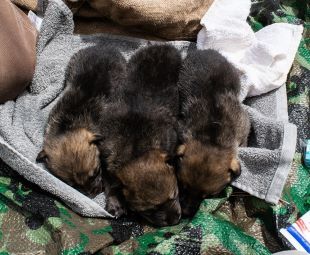 Mexican wolf pups about to be cross-fostered, shown in photo from 2020.

PHOENIX  ̶  The Mexican Wolf Recovery Program reached a major milestone on April 1 when six cross-fostered Mexican wolves matured to breeding age in the wild. In doing so, the six wolves are now able to be counted as contributing to the genetic recovery of the subspecies.

This achievement brings the total number of cross-fosters surviving in the wild in Arizona and New Mexico to 13 and highlights the continuing success of Mexican wolf recovery efforts by the Arizona Game and Fish Department, U.S. Fish and Wildlife Service, New Mexico Department of Game and Fish, and other conservation partners.

Cross-fostering is an innovative technique used by the Mexican Wolf Interagency Field Team to increase genetic diversity in Mexican wolf populations in the wild. Wolf pups are born in captivity at one of a number of different accredited breeding facilities across the country. When the pups are 14 days old or younger, they are placed into a den of wild Mexican wolves with pups of the same age. The surrogate wild wolf parents raise the new genetically diverse pups as if they were a part of the original litter.

“We trounced that number,” said Jim deVos, Arizona Game and Fish Department Mexican Wolf Recovery Coordinator. “The importance of this milestone cannot be overstated, as conserving genetic diversity is one of the major challenges to recovery and delisting of this subspecies.”

Mexican wolves were once widespread throughout the American Southwest. Towards the turn of the century, however, they were the subject of an eradication campaign because of conflicts with human interests at the time. By the mid-1900s, Mexican wolves had been effectively eliminated from the United States, and populations in Mexico were severely reduced. Following the passage of the Endangered Species Act in 1973, Mexican wolves were listed by the U.S. Fish and Wildlife Service as an endangered species in 1976, thereby prompting recovery efforts to save the species from extinction.

Releasing captive-raised Mexican wolves into the wild has been part of the Mexican wolf recovery program since 1998. While the number of wolves in captive breeding facilities around the United States and Mexico today is a little under 400, they all originated from seven founders captured from the wild when the species was close to extinction in the 1970s. When individuals in a wildlife population are closely related, genetic management has to be part of recovery and can lead to substantial challenges to their propagation. Mexican wolves are no exception.

“It is a major milestone that cross-fostering efforts have resulted in this number of genetically valuable Mexican wolves being recruited into the wild population to help both the genetic recovery criteria and the number of wolves in the wild to meet recovery goals,” said Clay Crowder, AZGFD’s Assistant Director, Wildlife Management Division. “The Mexican wolf is a subspecies that was nearly lost to the wild, but with careful management as demonstrated by this benchmark, recovery and return to state management is a foreseeable goal. While the Endangered Species Act prescribes the need for recovery, the successful progress on the ground is proof of effective state, federal, and tribal management.”

Another high point occurred when a cross-fostered female Mexican wolf (F1866) in the Elk Horn pack was documented as pregnant. AZGFD Veterinarian Dr. Anne Justice-Allen used ultrasound to confirm the pregnancy and determine that the female wolf is likely due to whelp (give birth) in late April. To date, at least four cross-fostered wolves have bred successfully in the wild, producing a total of seven genetically valuable litters. Once F1866, who came from the Endangered Wolf Center in Missouri, whelps her pups, the total number of successful cross-foster parented litters will rise to eight.

“When we started the cross-fostering program seven years ago, we only hoped it would be successful,” said Maggie Dwire, Deputy Mexican Wolf Recovery Coordinator for the U.S. Fish and Wildlife Service. “These milestones are proof that cross-fostering is a valid and viable tool that is contributing to the recovery of the species. We are grateful to all the captive facilities, partners, and field staff who work tirelessly year after year to make cross-fostering a success.”

Cross-foster efforts for 2022 are planned to begin later this month in both Arizona and New Mexico.