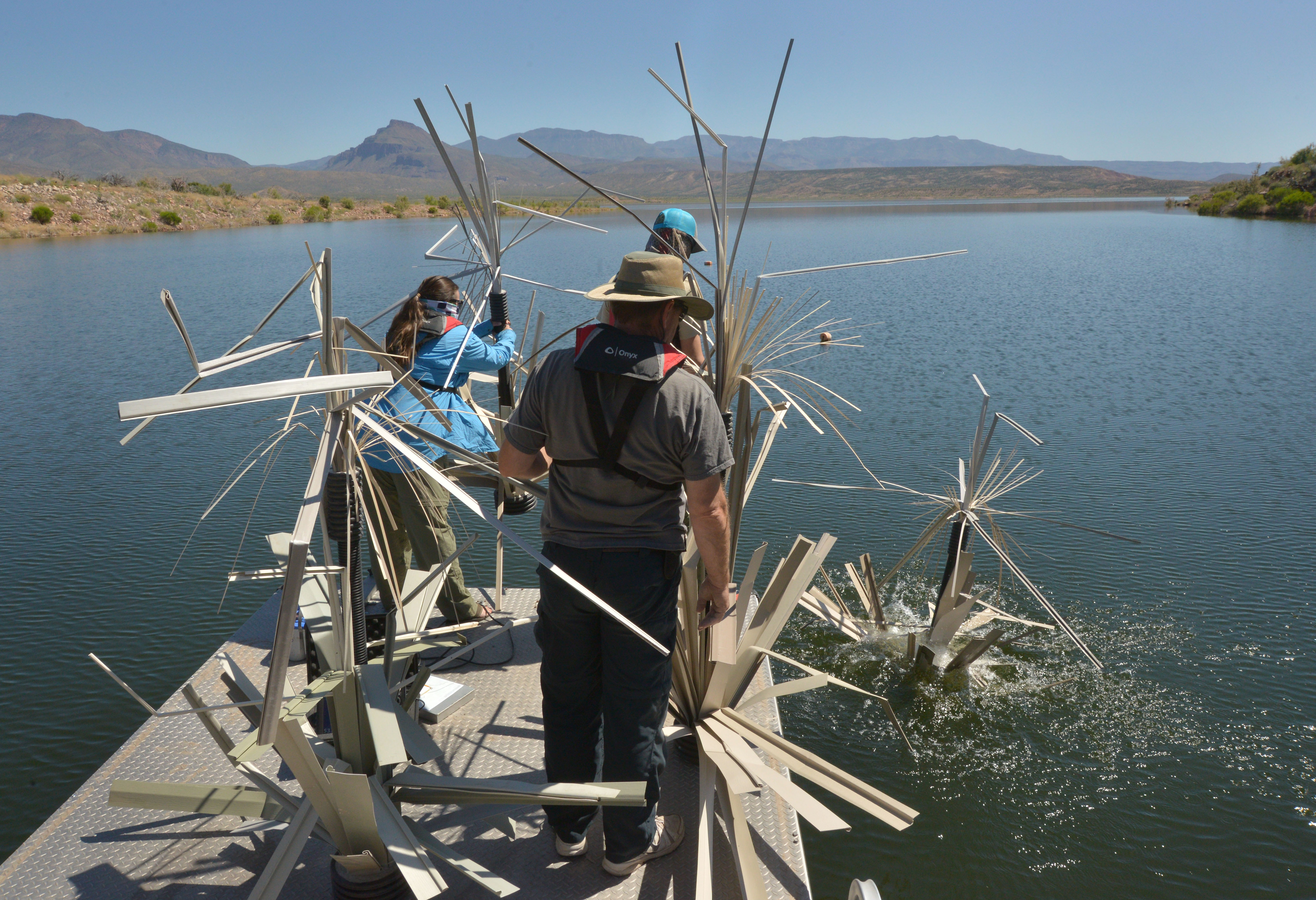 PHOENIX – They are manmade homes for fish, some made of concrete, others of PVC, and like building a neighborhood, provide the architecture for sustainable life.

The first step in placing fish habitat into the  central Arizona reservoirs took place on Thursday, April 20 at Roosevelt Lake with Arizona Game and Fish Department biologists dropping Fishiding HighRise structures made of environmentally-safe PVC  to the bottom of Roosevelt Lake. These recycled items, 8 feet tall and excellent habitat for crappie, became the first fish homes. AZGFD plans to expand them into fish cities.

For anglers, this Tonto National Forest Lakes Habitat Improvement Project will result in better fishing for generations to come in the region’s most popular fishing lakes.

Also in April, Roosevelt Lake was stocked with 12,000 crappie fingerlings, as well as 25,000 5-inch Florida-strain largemouth bass for the third consecutive year. Roosevelt Lake also is above 70-percent full for the first time since October of 2011. The higher water level has flooded shoreline brush that provides more cover and habitat for spawning fish. The fish habitat improvement project includes placing multiple types of fish habitat around the lake at varied depths to ensure there is plenty of fish habitat available for when water level fluctuates.

This fish habitat project is a cooperative effort with numerous anglers, as well as volunteers from organizations such as Gila Basin Angler Roundtable and Midweek Bass Anglers. Supporting agency partners include the U.S. Fish and Wildlife Service Sport Fish Restoration Program, Tonto National Forest, and the National Fish Habitat Partnership-Reservoir Fish Habitat Partnership. Volunteers have been helping build concrete fish balls and Georgia cubes for two years and have donated hundreds of hours to the project. 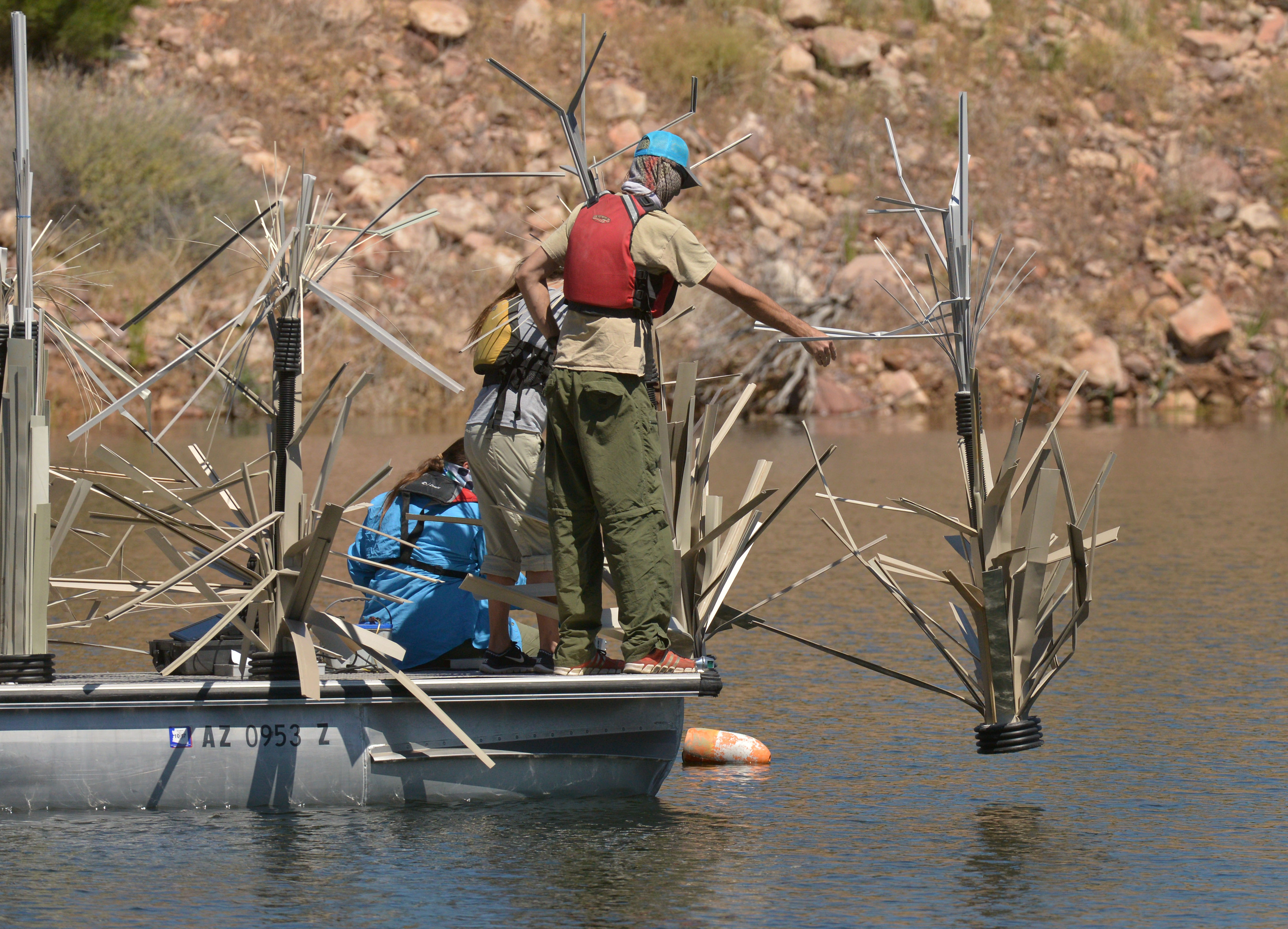 Fishiding HighRise structures are made of environmentally-safe PVC and are excellent habitat for crappie.

Natural and artificial habitat are critical for fish spawning, recruitment, and growth. The reservoirs of central Arizona lack sufficient hiding and ambush cover and habitat for growth and survival of young fish. The artificial structures provide a surface for microscopic animals to grow, which attracts bait fish and in turn the predatory fish for anglers to target.

Fishing is one of Arizona’s most popular outdoor activities. Providing good places for anglers to fish is one of AZGFD’s primary goals. Five of the biggest and most popular lakes to fish are located in central Arizona and are managed by Salt River Project for the valley’s water supply: Roosevelt Lake, Apache Lake, Canyon Lake, Saguaro Lake, and Bartlett Lake.

In 2014 the Department embarked on a program to improve fisheries habitat in the reservoirs of central Arizona and restore the fisheries to their former glory days. All five of these lakes are more than 70 years old, and Roosevelt Lake is more than 100 years old. Over time, reservoirs lose quality fish habitat through decomposition of the natural vegetation that was flooded, particularly where water levels fluctuate wildly, such as at Roosevelt.

Similarly, one of the largest and most successful fish habitat projects in the nation, the Lake Havasu Fishery Improvement Program, has been ongoing since 1993 and is credited with improving sport fish habitat in this Colorado River reservoir.

The Tonto National Forest is the land management agency for five of the biggest and busiest fishing lakes in Arizona. In 2013, the economic value to the state of Arizona associated with these five lakes was estimated to be more than $318 million.

See more about fishing in Arizona.