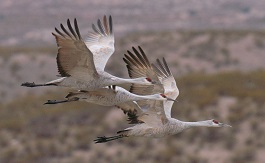 WILLCOX, Ariz. — Sandhill cranes by the thousands are once again returning to their wintering grounds at the Whitewater Draw Wildlife Area in southeastern Arizona.

For the next few months, viewers can observe almost 20,000 of these fascinating birds on a live-streaming camera installed by the Arizona Game and Fish Department (AZGFD). The live stream can be viewed at www.azgfd.gov/sandhillcranes.