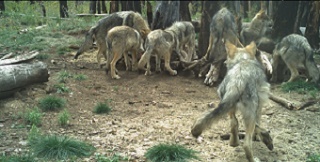 AZGFD wolf biologists will begin fall trapping efforts in September to document cross-fostered wolves that have survived and to deploy tracking collars to monitor and manage the wolf population in Arizona.

This spring, biologists from the AZGFD, New Mexico Department of Game and Fish and Mexican Wolf Species Survival Plan, with extensive logistical support from USFWS, cross-fostered a total of 20 genetically diverse wolf pups from captive facilities across the United States into litters of wild wolf packs. Since 2014, there have been 52 genetically diverse wolf pups cross-fostered into the wild to work toward genetic recovery of the Mexican wolf population.