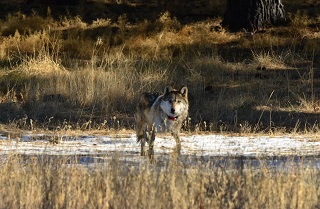 PHOENIX — The wild population of Mexican wolves in the United States continued to grow in 2021. According to the 2021 annual count, the U.S. population of Mexican wolves has increased by 5 percent since the previous year, raising the total number of wolves in the wild to a minimum of 196 animals. This marks the sixth consecutive year of growth in the wild population.

From November 2021 through February 2022, the Interagency Field Team (IFT) conducted ground and aerial counts of Mexican wolves in Arizona and New Mexico. According to the IFT, the population is distributed with 112 wolves in New Mexico and 84 in Arizona. In 2020, the team documented a minimum of 186 wolves. The slower growth in 2021 is attributed to low pup recruitment in the wild population.

“We are happy to see the wild population of Mexican wolves continue to grow year after year,” said Brady McGee, U.S. Fish and Wildlife Service Mexican Wolf Recovery Coordinator. “The Service and our partners remain focused on recovery through improving the genetic health of the wild population and reducing threats, while also working to minimize conflicts with livestock.”

“While we hope for a higher growth rate, the 5% growth observed, when looking at the totality of the program, still indicates a recovering population. Overall wildlife populations had a hard year with low precipitation and little winter snowpack last year. I am encouraged by the increase in breeding pairs and the number of packs present. These measures continue to increase and bode well for future recovery for the Mexican wolf,” said Jim deVos, Arizona Game and Fish Department Mexican wolf coordinator.

In 2021, the IFT placed a record 22 captive-born pups into seven wild dens (a process called “cross fostering”) to boost the genetic diversity in the wild population. These cross-fostered pups are included in the minimum of 144 pups recorded for the year. The IFT has since captured and collared two of these pups and will continue efforts in 2022 to document others that may have survived. With these newly collared pups, the known number of fostered wolves alive is 14.

The Mexican wolf is the rarest subspecies of gray wolf in North America. It is listed separately from the gray wolf as an endangered subspecies under the federal Endangered Species Act. In 1977, the Service and many partners initiated efforts to conserve the subspecies by developing a bi-national captive breeding program with the seven remaining Mexican wolves in existence. Approximately 380 Mexican wolves are currently maintained in more than 60 facilities throughout the United States and Mexico.