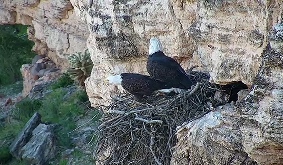 The nest is primed, and the live-streaming camera is already broadcasting the day-to-day life of a pair of bald eagles hoping to raise a family inside their Lake Pleasant Regional Park nest. Nearly 400,000 viewers tuned in for the inaugural season to watch the unfiltered drama that transpired earlier this year. Read more

Arizona’s bald eagles are back and they will soon be working on the next generation of eagles at breeding sites statewide. To assist with the state’s continued bald eagle population growth, the Arizona Game and Fish Department encourages outdoor recreationists, aircraft pilots, drone operators and motorized paragliders to do their part by not disturbing the state’s 89 eagle breeding areas. Read more

The Arizona Game and Fish Department is excited to announce the winners of the 2019 wildlife photo contest. Julie Curtis’s photo of Harris’s antelope squirrels was awarded best in show and is showcased on both the cover and in the calendar issue of Arizona Wildlife Views. More than 300 photographers entered this year’s wildlife photo contest. Read more

Arizona’s embattled Mount Graham red squirrel population grew 4 percent in 2019, providing proof that the endangered squirrel continues its fight back two years after nearly being wiped out by a devastating wildfire. The stabilization of the population over the past year comes after much of the territorial squirrel’s habitat was severely damaged in 2017 by the Frye Fire in the Pinaleño Mountains in southeastern Arizona. Read more

Sandhill cranes have returned to southeastern Arizona, and the Arizona Game and Fish Department’s live-streaming camera is again trained on their wintering grounds at Whitewater Draw Wildlife Area. The live stream, which can be viewed at www.azgfd.gov/sandhillcranes, offers viewers a glimpse into the wintering habits of up to 14,000 cranes roosting at the wildlife area. Read more

The Arizona Game and Fish Department (AZGFD) has confirmed the presence of New Zealand mudsnails, an aquatic invasive species, in AZGFD’s Page Springs Fish Hatchery. As a result, stockings from Page Springs have been halted, yet AZGFD has been purchasing fish from out-of-state vendors to ensure most waters scheduled to be stocked do indeed receive trout. Read more

Wildlife officers are investigating the poaching of a mule deer buck between Oct. 27 and 29 on the Kaibab Plateau in Game Management Unit 12AW. The dead buck was left for waste at a wildlife water east of the road 235A, and the poacher made no attempt to hide the animal. Game camera photos from the area show three individuals at the scene on the day the incident likely occurred, and AZGFD is asking for any information that may identify these individuals. Read more

The Arizona Game and Fish Department is investigating the poaching of a female black bear that was killed between Nov. 1 and Nov. 6 north of Woods Canyon Lake in Game Management Unit 4A. The bear was killed and dumped off of Forest Road 169 east of Forest Road 300. The poacher attempted to hide the animal and left the meat to waste. Physical evidence was recovered from the scene. Read more

Boaters are reminded to “clean, drain and dry” – and especially decontaminate — their watercraft and equipment before exiting listed waters containing aquatic invasive species (AIS). This reminder is particularly important for out-of-town visitors who moor their boats at AIS-affected waters and are preparing to head out of state. Read more

Start 2020 off right and help us drop Christmas trees into Bartlett Lake. We’re looking for volunteers on Friday and Saturday, Jan. 3-4, and Saturday Jan. 11 to install these used Christmas trees that will help ensure robust fish populations at this Tonto National Forest impoundment. We’ll be starting at 8:30 a.m. each day from the yellow cliffs boat ramp. Read more

The Arizona Game and Fish Department (AZGFD) reminds seasonal residents and visitors who brought an off-highway vehicle into the state that they must now purchase an OHV decal prior to heading out on trails. Since the nonresident OHV decal went on sale Sept. 1, nearly 4,500 have been purchased by residents in 36 states and Canada. Read more

Deadline to apply for shooting range development grants is Jan. 15

The Arizona Game and Fish Department continually strives to deliver online products and services that better serve its customers. A major goal was recently achieved when the department, using several process improvement tools within the Arizona Management System (AMS) that Gov. Doug Ducey has brought to state government, was able to reduce the amount of time and manpower required to process applications. Read more