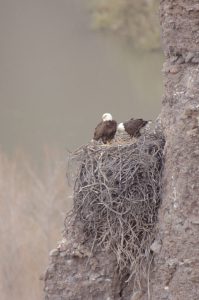 Arizona’s bald eagle breeding season is on the horizon and multiple public land and water areas will be closed to protect the majestic animals and ensure even more young eagles take to the skies this spring. Read more

Sandhill cranes put on a show on upgraded live-streaming camera

Sandhill cranes have returned to southeastern Arizona and the Arizona Game and Fish Department’s live-streaming camera is again trained on their wintering grounds at Whitewater Draw Wildlife Area. Read more

Sixty of Arizona’s bighorn sheep have a new home. Dozens of bighorns were returned to their historical ranges last week as part of two translocations from robust populations of desert bighorns in the Silver Bell Mountains northwest of Tucson and Rocky Mountain bighorns near Morenci. Read more

The Arizona Game and Fish Department is excited to announce the winners of the 2018 wildlife photo contest. James Stamsek’s photo of mule deer at Lost Dutchman State Park was awarded best in show and will be showcased on both the cover and in the 2019 wildlife calendar. Read more

The Arizona Game and Fish Department reminds boaters to “clean, drain and dry” – and especially decontaminate — their watercraft and equipment before exiting waters designated as having aquatic invasive species (AIS). Read more

The weather is cool, but the water is dangerously cold

The calendar says winter is weeks away, but the thermometer says otherwise. For that reason the Arizona Game and Fish Department reminds undeterred paddlesport enthusiasts to practice coldwater safety when heading on the water.Read more

Hunters gets second shot at doves through Jan. 6

Arizona dove hunters are able to double their wing-shooting pleasure now that the state’s “second” season is underway. Unlike the 15-day season that begins Sept. 1, the late season lasts 45 days and runs through Jan. 6, 2019. Read more